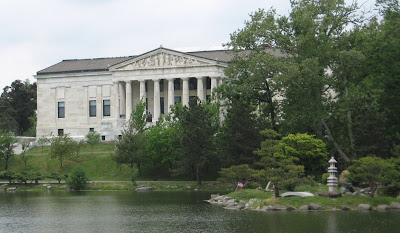 The Buffalo and Erie County Historical Society has its main headquarters here, on Nottingham Court. The Pan-Am Building was constructed for the 1901 Pan-American Exposition. When the expo ended, practically everything was torn down. This is not because of sorrow over the McKinley assassination, although no one was too happy about that. It was a matter that the facility was designed for that.

However, the New York State building was a permanent structure, and that's where the Historical Society is today. You can see it pictured here, with Mirror Lake in front of the building. The entrance to the facility is actually on the other side, and the best view probably comes on the adjoining expressway -- which comes at 50 miles per hour. But, you might be able to pick out the statue on the patio. That's Abe Lincoln, with a good view of the lake.

The building has some permanent exhibits, including a street of shops and a display of Buffalo-made products, and some temporary ones. The staff does some good work; the celebration of the centennial of the Pan-Am Exhibition was particular well done and well-received.

The Society obviously isn't overflowing with money. The main building isn't air conditioned, for example, which makes some summer visits problematic. But it does the best it can, and deserves public support.
Posted by Budd Bailey at 12:41 AM No comments: 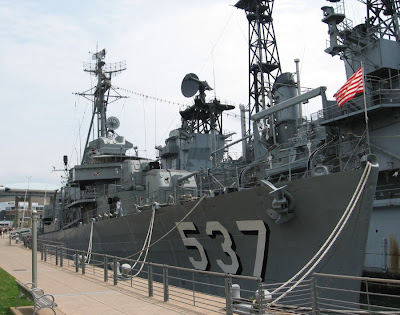 You might be wondering what a couple of battleships are doing on the Buffalo waterfront.

Well, you never know if Canada might be tempted to attack.

Seriously, Buffalo has the only inland naval park in the country. Shown are the U.S.S. Little Rock (the big one in back) and the U.S.S. Sullivans. The U.S.S. Croaker, a submarine, is also there.

The area also has some planes, tanks and other equipment on display as well as some memorabilia. But the boats are the big attractions, and the tours of them are self-guided.
Posted by Budd Bailey at 12:31 AM No comments: 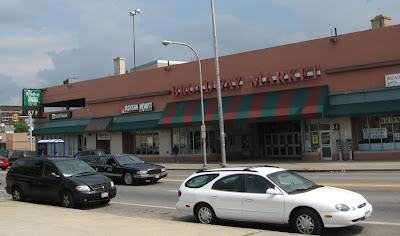 Every big city used to have a huge market, filled with vendors selling fresh food. Buffalo was no exception, as the Broadway Market has been around in one form or another for more than 120 years. It was the center of commerce in the Broadway-Fillmore area of Buffalo for decades. The latest building went up in 1956, and takes up just about all of a city block when you include a parking garage on levels two and three.

You can probably guess the problem. The clientele went through a couple of generations and moved away, and the new residents had an ever-decreasing attachment to the place. That's led to lots of studies, some government funding and some empty space.

Yes, the Broadway Market is a Buffalo tradition ... one week a year, just before Easter. People go to pick up goods, including the ever-popular butter lamb. But what does the Market do in the other 51 weeks? They are still working on that.

One quick story about the picture. The lane in front of the Market, on the far side of the street, is reserved for taxis, at least according to a sign. I didn't see many customers there on a May afternoon, let alone taxis. Are they saving the lane for the one-week-a-year burst, or is it left over from bygone days?
Posted by Budd Bailey at 12:16 AM No comments: 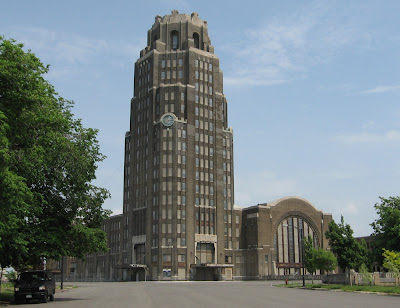 The Central Terminal and Buffalo have had an odd relationship over the years.

The structure was built in the late 1920's, and is one of the youngest of the grand old railroad terminals, relatively speaking. The art deco style remains a classic. The terminal was quite busy in the Thirties, as Buffalo was second only to Chicago in rail traffic.

The problem, of course, is that airplanes were on their way in. And railroads thought they were in the railroad business, when they were actually in the transportation business. A slow decline in the business took place after World War II, and eventually the facility closed in the late 1970's.

That left Buffalo with a grand old building that no one knew what to do with. Over the years, practically everything of value has been stripped from the building by vandals. However, the structure remains, waiting for a chance at rebirth. In 2009 there was talk of high-speed rail between Buffalo and Albany, with the Central Terminal a focal point for redevelopment.

We'll see. In the meantime, it still looks good.
Posted by Budd Bailey at 12:05 AM No comments: 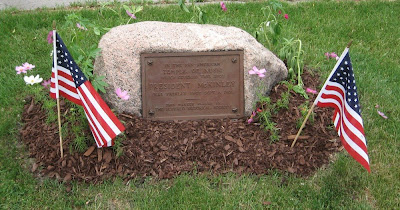 President William McKinley visited the Pan-Am Exhibition in Buffalo on September 6, 1901. He decided to greet patrons at the Temple of Music on the grounds. Bad idea.

McKinley was shot by Leon Czolgosz, an anarchist. McKinley lingered for a while and might have survived had the medical technology of the day been a bit better. But the President died on Sept. 14.

It's been argued that Buffalo never quite got over the shame of that day, although other cities seemed to recover from such actions. The city erected a huge memorial downtown by City Hall in Niagara Square.

The actual site of the act is a different story. The public literally tore the Temple of Music apart, taking home souvenirs. When the Exposition ended later in 1901, the grounds were developed.

However, the actual spot of the shooting is marked on an island on a residential street in North Buffalo. And this is what it looks like.
Posted by Budd Bailey at 11:56 PM No comments: