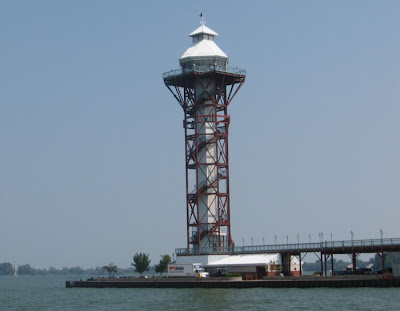 If you had to guess which bicentennial, you'd probably be wrong.

The tower is at the end of State Street and it's tough to miss when driving down the waterfront. There are a couple of observation towers. We would have taken some pictures the day we were there, but the area was closed off for a fireworks show scheduled for that night. Darn. You can see the Perry Monument at Presque Isle if you look carefully (might help to click on the picture to see a larger image at the lower left).

The area around the tower has a hotel, some shops, marina, etc. It's a clean, functional, people-friendly area. That serves as a nice contrast to other parts of the Erie waterfront, which has surprisingly few areas for public access. So at least they are trying.
Posted by Budd Bailey at 11:20 PM No comments: 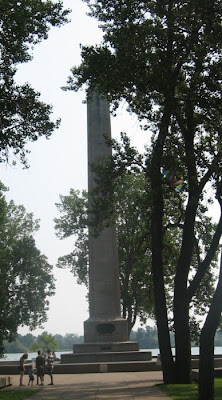 Presque Isle is, according to the travel book, French for "almost an island." Fair enough. It's a long peninsula that extends southwest to northeast into Lake Erie.

No matter what you call it, it's a great spot. There are seven miles of beaches, and lots of trails. When we went on a hot Sunday morning in August, it seemed like all of Erie was either going for a bicycle ride or enjoying the beach. There's a marathon held each year here that has to be the flattest course in the business.

Pictured here is the Perry Monument. Commodore Oliver Perry kept his fleet in the protected waters here during the War of 1812. Then he guided the ships out and headed down the Lake, where he won a big battle over the British around Put-in-Bay, Ohio. The Commodore got a monument there and here for his trouble.

And don't go looking for Presque Isle Downs and Casino in the park. It's on the other side of Interstate 90, a few miles away.

(Be notified of new posts on this site via Twitter @WDX2BB)
Posted by Budd Bailey at 11:11 PM No comments: 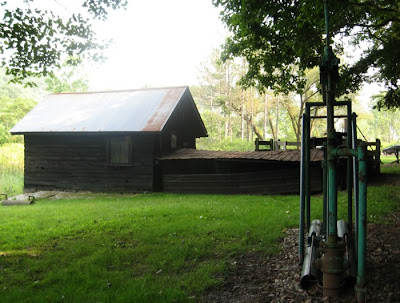 Say hello to McClintock #1 of Oil City, Pennsylvania. It's still pulling up oil, about 150 years after it first hit a gusher.

It takes a sharp eye to find it. It is just off Pennsylvania State Highway #8 a couple of miles north of Oil City. There is a small sign along the road. Visitors go around an industrial building, cross some railroad tracks, and seek the parking lot to the right. It's a very short walk from there to the well.

Apparently oil from the well can be purchased at the Drake Well Museum in Titusville. There's a museum in downtown Oil City, which obviously has seen some tough times economically. So you should take a look around the city and spend a few tourism dollars there.
Posted by Budd Bailey at 10:59 PM No comments: 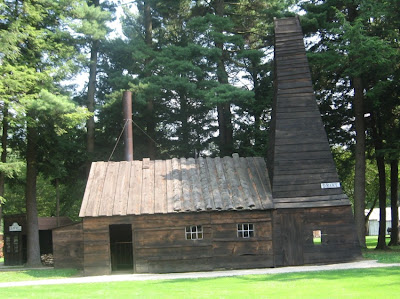 A revolution of sorts started right here in 1859. It also made a bunch of guys in the Middle East really happy many, many years later.

This is the spot around Titusville, Pennsylvania (NW part of the state) where Colonel Edwin Drake established the first commercially successful oil well. The stuff was on the land and in the water in the region, and Drake decided it might be worthwhile to drill several dozen feet down to see if he could hit something. Drake was lucky -- another spot would have missed the reserve -- but he hit a gusher.

I supposed someone would have discovered the stuff somewhere eventually, but it's still fun to stand on that very spot. A park has been established on the property that runs by Oil Creek. There's a museum with a video that explains everything in 15 minutes, some history of the region, plenty of oil drilling devices from the past, even some picnic grounds.

The oil strike caused many people to move into the region in the 1860's, and millions of barrels were pulled from the ground and shipped to refineries in Pittsburgh. Once we figured out the internal combustion engine, well, America would have a whole different look in the 20th century.

Sometimes it's nice to take a look at where we came from, even if Titusville is a little out of the way for most.

(P.S. If you are in the area, you might have an interest in a nearby town called Pithole. A classic oil boomtown, it started from nothing around 1860, went to 15,000 in population within a few years, and then went back to zero as the oil ran out. There is a small museum there, so those that like ghost towns might want to made the sidetrip.)
Posted by Budd Bailey at 11:51 PM No comments: