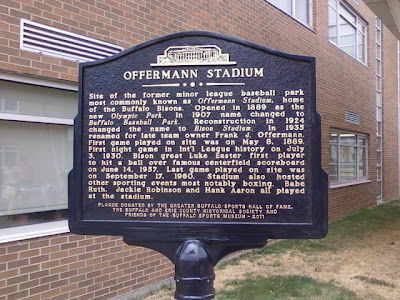 Cue up Frank Sinatra: There used to be a ballpark here.

The ballpark in question is Offermann Stadium. The structure was on the corner of Michigan and East Ferry, going through a few changes along the way, and served the area's baseball fans from 1889 to 1960.

Local sports historian John Boutet worked hard to get a plaque up on the site for a couple of years, and in August 2012 that item came off his to-do list. A nice little ceremony was held at the Buffalo Academy of Visual and Performing Arts, and the plaque pictured here was unveiled. (Click on the picture for a larger look at it.)

It's tough to hear a definitive story on why the old stadium was torn down after the 1960 season. There was talk that an expansion team might come to Buffalo at some point (local people were involved in the Continental League), and that people in this particular neighborhood wanted a new school in their midst instead of an old ballpark. Whatever the right reason, the Buffalo Bisons moved to War Memorial Stadium, where they only lasted until 1970 before folding. Luckily, the team came back in 1979, and now is in a downtown location.

If you are so inclined, you can drive over to Summer and Richmond and see where the Bisons' stadium before Offermann was located. Buffalo was in the National League in the early 1880's. The team used to practice at Riverside Park way back when.

Or, you can just look for the spirits of Ollie Carnegie and Luke Easter around the sign. It's about where the pitcher's mound was located.

Be notified of new posts via Twitter @WDX2BB.
Posted by Budd Bailey at 7:57 PM No comments: