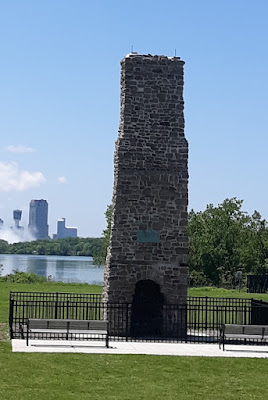 Say hello to the Old Stone Chimney, which is a piece of history in Niagara Falls. The structure dates back to 1750, and it stayed there for about 150 years. The Chimney was right along the portage road in Niagara Falls, as goods and people had to use land to get around the Falls.

The Chimney has been moved a few times in its history. Until recently, it was in Porter Park in order to help save it. However, when a decision was made in 2015 to remodel the road leading from Interstate 190 to the Falls (part of the Robert Moses Expressway), it was decided to move it there. The Chimney was marked, taken apart, moved a few miles, and reconstructed with some improvements made in the process.

There's one problem here. The Old Stone Chimney is not easy to see, unless you know it is coming. It's just off the highway going away from the falls, and it features a couple of historical signs and a parking lot. In other words, no one will stumble upon it while walking. You'd think a better place could have been found, so the parking lot generally is rather empty. Oh well.

(Be notified of new posts on this site via Twitter @WDX2BB)
Posted by Budd Bailey at 3:13 PM No comments: 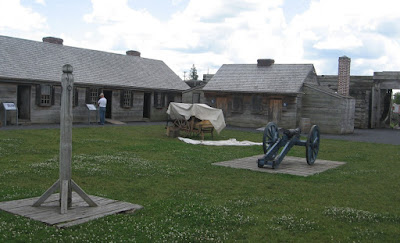 Fort Stanwix took a small but pivotal role in the American Revolution. The colonies took it from the British, and held on despite a siege from enemy forces that lasted more than three weeks. If Fort Stanwix falls, well, maybe we'd be speaking with British accents.

The Fort is located in in Rome, relatively close to Utica. There is an Air Force base up the road a bit. Rome is rather flat, but the base is located on what could be called the high point of the area. That made it a good spot strategically, since it was between the waterways leading to Lake Ontario in one direction and the Mohawk River in the other.

There is a nice welcome center on the land nearby, which has a nice exhibit and a movie about the facility. From there it is a short walk to the Fort itself; the contents have been recreated to show what life was like for the soldiers.

(Be notified of new posts on this site via Twitter @WDX2BB)
Posted by Budd Bailey at 2:47 PM No comments: 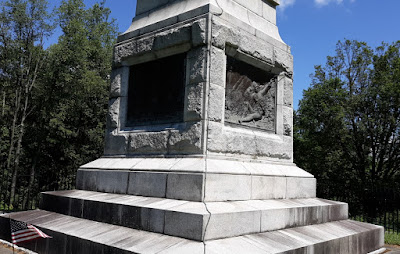 Here's a spot that qualifies as a little-known but crucial turning point in American history.

In 1777, the British hoped to take control of New York State in its effort to put down the rebellion of the Americans. New England thus would be cut off from the rest of the colonies. To do that, one group would come down from Lake Champlain and the Hudson River, while a second would come up from New York City.

To make it work, a third force was needed from the West. General Barry St. Leger led his troops across Lake Ontario and toward the area we call Rome now. It was a short hop from there to the Mohawk River and an easy trip to Albany. However, the British had trouble with the pesky Americans there, and needed help. Those reinforcements ran into more American forces, and fought a bloody battle in Orisky. The British took off, St. Leger gave up, and the British eventually suffered a huge loss a few months later in Saratoga. Did the course of the war change here? Quite possibly.

The grounds have been cleared and turned into a memorial to those who lose their life. The monument extends well into the sky, but the base is worth the photo. The area is a National Historic Landmark.

(Be notified of new posts on this site via Twitter @WDX2BB)
Posted by Budd Bailey at 2:39 PM No comments: 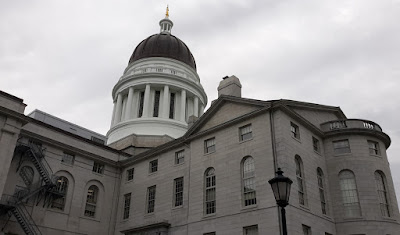 I have stopped at a number of state capitals over the years, and this might be my favorite. Before telling you why, here's a little history.

The first capital was in Portland, which remains the largest city. However, it was considered a little too far south by the rest of Maine, so it was moved north to Augusta. It was still a long way for the border with Canada, but apparently people in 1827 were satisfied. A capitol building was constructed around that time, and it has been remodeled several times over the years.

It's a rather standard building as these things go, with a Senate and a House of Representatives. The middle portion has a Hall of Flags, complete with historic banners (or copies) and paintings of well-known residents like George Mitchell, Ed Muskie and Margaret Chase Smith.

Here's the neat part - even in a post 9/11 world, the place is quite open. Yes, you need to go through a security check. But once you are inside, it's a remarkably free area. Visitors can sit in the balcony of the House and watch legislators in action. Even better, though, is the fact that the Senate has seats available on its floor. That means anyone can walk in, sit down only a few feet from the working legislators, and watch the proceedings.

When we were there, a controversial discussion on gun control was taking place. We saw lobbyists scurrying around, and one legislator actually running in the halls so he didn't have to talk to reporters. In other words, we felt like we could have been working there - it was a close-up look at how government really works.

The grounds are nice too, with a replica of the Liberty Bell that was handed out to all of the states at one point. If you are in the neighborhood, be sure to stop for a visit.

(Be notified of new posts on this site via Twitter @WDX2BB).
Posted by Budd Bailey at 2:24 PM No comments: 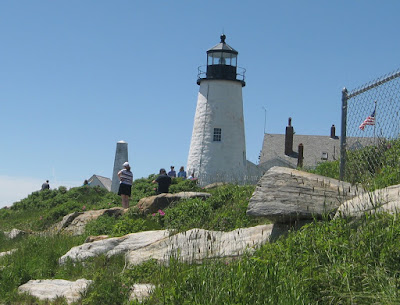 If it's the right quarter, you have your own image of the lighthouse at Pemaquid Point.

It's sticks out into the water in Boothbay. A lighthouse first went up on that spot in 1827, but it wasn't built so well and lasted about eight years. The replacement has lasted much longer.

The structure has become something of an icon - to the point where it was chosen to appear on Maine's official state quarter.

The lighthouse is in a state park, and you can get a good view of the area from there. As you might have guessed, the rocky coast of Maine is on full display - as is some historical information about the structure inside the lighthouse. The part is located at the end of a peninsula located south of Damariscotta.

(Be notified of new posts on this site via Twitter @WDX2BB)
Posted by Budd Bailey at 2:11 PM No comments: 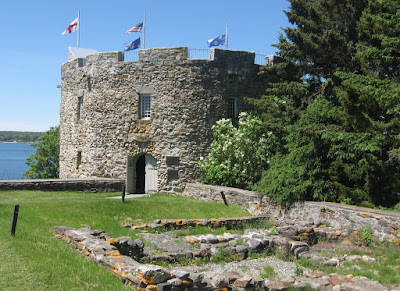 Plenty of forts were built on this spot, a beautiful one overlooking Pemaquid Harbor and John's Bay in Maine. None of them lasted too long.

The first one went up in 1630, only 10 years after the Pilgrims showed up down the road in Massachusetts. That one, a trading post, lasted three years. Fort Pemaquid and Fort Charles followed, but neither made it out of the 1600s.

The English built Fort William Henry in 1690, and that structure is the model for what is in the photo. The French and Indians attacked the area in 1696, and the English fled. It was rebuilt and called Fort Frederick in 1729, and lasted for 30 years until a new fort was building in a different location.

Now comes the interesting part to tourists. The facility that was Fort William Henry has been partially rebuilt. The tower serves as something of a museum on the area for visitors. The second floor has an exhibit on the fort's history (1666-1761). Meanwhile, excavation efforts has revealed part of the fort; it's in the foreground of the photo. The tower offers some splendid views of the harbor, and the inside of the "fort" looks like a great place for a picnic.

(Be notified of new posts on this site via Twitter @WDX2BB).
Posted by Budd Bailey at 2:03 PM No comments: 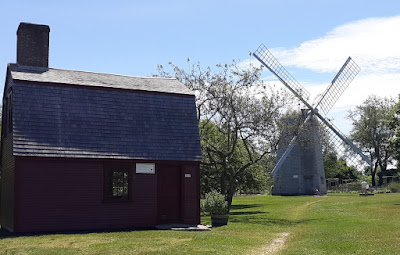 Need a place to walk in Middletown during a visit, without seeing water? It's a little difficult, and may not be the popular option because of all of the views of the ocean and the bay in the area. Still, the Prescott Farm is a pretty good spot for a short visit.

There are a few old buildings, including a windmill, on display on the farm. The University of Rhode Island's Master Gardeners also use part of the land for some demonstration projects. If you prefer the land to be a bit more wild, there's a small forest adjoining the display area that has a nice walking path. Just be prepared for some wet spots for your feet along the way.

Prescott Farm is located on the the West Main Road in Middletown, which is the major route for those heading to Newport. It's not a big attraction, but a pleasant one.

(Be notified of new posts on this site via Twitter @WDX2BB)
Posted by Budd Bailey at 1:48 PM No comments: