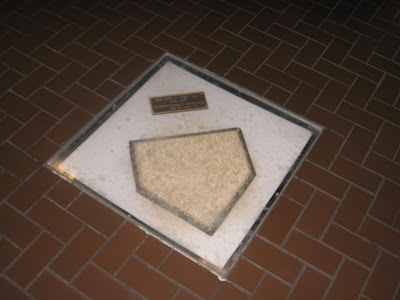 Forbes Field was home to the Pittsburgh Pirates from 1909 to 1971. Then it was torn down as the Pirates headed to Three Rivers Stadium downtown. While Three Rivers is already gone and hardly missed, Forbes Field is still a pleasant memory to many.

Maybe that's why parts of the place are still visible to the public. Part of the outfield wall has been saved. It sits in Schenley Park, adjoining the University of Pittsburgh. Every October 13, people gather and listen to a recording of Game Seven of the World Series, ended by Bill Mazeroski's dramatic walk-off home run.

Home plate was saved as well, and it can be found in Posvar Hall across the street from the wall. However, it's not exactly where it was when the ball park was standing. Supposedly, home plate rested where a women's restroom is now. The display spot in the hall is a bit more, um, tourist-friendly. There's a nice autographed picture of Mazeroski nearby. It's all worth a look for baseball fans.
Posted by Budd Bailey at 1:26 PM No comments: 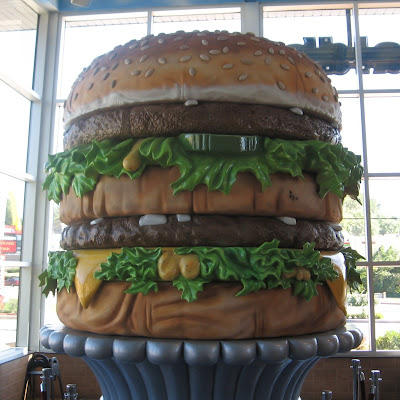 I'm sure I don't have to tell you folks that the Big Mac was invented in Uniontown, Pennsylvania. Such an event deserves to be remember, and this one is ... but not in Uniontown, but in North Huntington.

The Big Mac Museum is part of a McDonald's on U.S. 30 just West of the Pennsylvania Turnpike. There are a variety of kiosks and exhibits dedicated to the Big Mac, including packaging and pictures. The big thrill, though, comes when entering the kids' area. The Big Mac pictured above is waiting for you.

While you can order a Big Mac there, no one seems to have a problem about someone stopping by to look around.
Posted by Budd Bailey at 1:20 PM No comments: 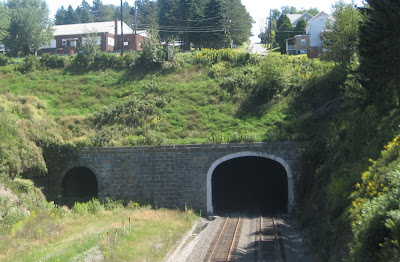 It's tough not to hear about railroads when visiting Southcentral Pennsylvania. Every town likes to connect itself with the history involved, and that includes Gallitzin.

The town is located a little bit West of Altoona, off U.S. 22. Right in the middle of it is Gallitzin Tunnels Park. You take a walk on an overpass and see the tunnel that is still used by the Norfolk Southern. To its left is the remains of another tunnel, now out of use.

Adjoining the park is a restored caboose and some informational signs. Across the street is a small museum and gift shop. The workers there really are happy to see visitors; be sure to sign the guest book to let people (meaning those who keep track of attendance for funding purposes) know you were there.
Posted by Budd Bailey at 12:52 PM No comments:

As railroad curves go, this is a pretty interesting one.

The railroad industry had a problem in the 1850's -- how should get it an east-west line in Pennsylvania? The terrain was rather rugged. Engineers eventually came up with an elegant solution. They filled in some of the gaps in the landscape, and then built a rail line that made a sweeping curve of about 220 degrees as it slowly climbed up hill and out to the West.

It worked. In fact, it became one of the busiest train spots in the country. The site has been guarded during wartime (from the Civil War to World War II).

The facility is now a tourist attraction and a national landmark. Located just to the west of Altoona, railroad enthusiasts can drop by for as long as they want and watch the trains go by. Give it an hour, and you'll see a few -- sometimes two at once. Such as is shown in the picture above. There's also a museum at the bottom of the hill. 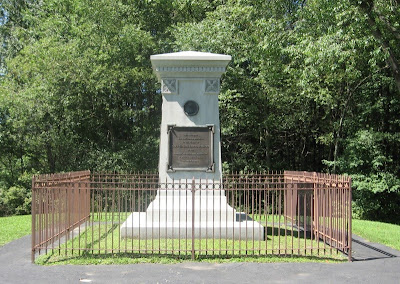 British Major General Edward Braddock led his nation's forces against the French in the French and Indian War in the 1750's. An American named George Washington was one of his top assistants.

Braddock was killed in Southwestern Pennsylvania. He was buried under the road that his own men had constructed, so that the French wouldn't do unspeakable things to the body. General Washington officiated at the ceremony.

The burial site eventually was dug up in 1804, and his remains were moved nearby. The road eventually became U.S. 40, and a monument was placed in Braddock's honor. It's considered part of Fort Necessity, which is from that era and is just down the highway.
Posted by Budd Bailey at 12:27 PM No comments: