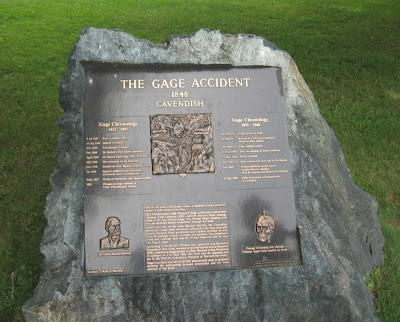 Every town has a claim to fame, as we've discovered on this blog. Cavendish, Vermont, has an odd one.

It's about a guy who had a 13-pound rod go through his head, and he lived to tell about it.

Phineas Gage was working on a railroad line in 1848 when disaster struck. A rod went under eye, into the brain, and out the top of his skull. He was not only alive, but never lost consciousness. Gage lived until 1860, although his personality was changed.

Cavendish "celebrated" the 150th anniversary of the event in 1998 with a plaque at Route 131 and S. Pleasant Street. It has a timeline of events. By the way, although the plaque is vague on the subject, doctors did remove the rod.

Railroad workers of America -- be careful on the job!
Posted by Budd Bailey at 10:42 AM