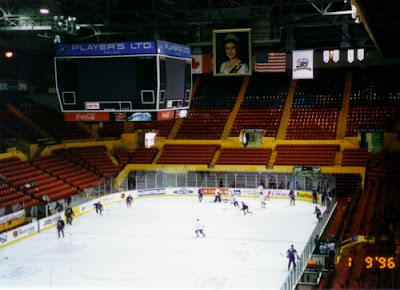 The Winnipeg Arena is a classic hockey barn, and that's said with the warmest of feelings.. It's built like a block, the sightlines are good, and the atmosphere feels like hockey. The NHL lost something when it moved out of places like this.

Any photograph of the arena has to include the picture of the Queen, hanging above the ice. You can see her next to the scoreboard. Every player in the league noticed it while playing. The portrait had been in storage in Ontario until 2015, when it was purchased and brought home.

We still remember you, Winnipeg Arena.

Be notified of new posts via Twitter @WDX2BB.
Posted by Budd Bailey at 7:51 PM