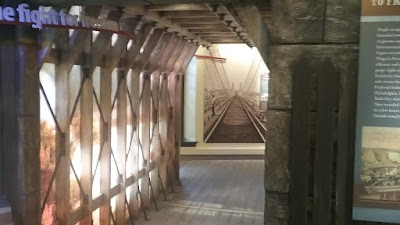 There's a relatively new attraction in Niagara Falls as of this writing, and it you are in the neighborhood it's definitely worth a stop.

The city by the waterfalls has added its name to the list of locations that have a museum to the so-called "Underground Railroad." No, kids, there were no tracks and engines involved here. It was a path of moving the enslaved peoples of the 19th century to freedom in Canada.

Niagara Falls was a natural as the last American stop on the railroad. Yes, you can see Canada from the waterfront - it was just a matter of crossing the river. Many did just that.

The museum, which had been in development for several years, spends a little time on the big picture. Who knew, for example, that quite a few African Americans went south to Mexico in those pre-Civil War days where slavery in sections of the United States was legal? But overall, the Heritage Center concerns itself with Niagara Falls' role in the process, as it should.

The Cataract Hotel in downtown Niagara Falls gets much of the space here. The top-of-the-line wait staff was all black, but it also was known to quietly help African Americans who wished to cross the border to Canada. Some were brought to Niagara Falls by their owners as servants, while others did take the Underground Railroad here. Remember, just because a slave was in New York State meant he was free, as the Fugitive Slave Act allowed slave owners to reclaim their "property." A few of the stories of the visitors have been brought to life here through the exhibits.

Eventually, a railroad bridge was built over the gorge to ease travel between the two countries. Sometimes those trains carried a different sort of luggage - blacks seeking freedom. The photo here shows a replica of the bridge (with a photo of the real thing just beyond it). The white light on the floor of the bridge is a representation of the border - one side of a line reads United States, while the other reads Canada. That was a very big step for those who crossed.

This isn't a huge place. Be sure to check out when a guided tour is held so that you can be on it to further your understanding of the issues. It takes about an hour to visit it. But there are plenty of videos, maps and interactive displays along the way.

It's interesting that the Heritage Center was placed right next to the actual train station, where you can buy a ticket to Canada if you so choose. The two areas share a lobby and a parking lot.

Most people usually go to Niagara Falls to look at the waters, and that's fine. I would guess that moving this closer to downtown is an attempt to bring more tourism to that area. Let's hope enough people do that to make this a success story.

(Be notified of new posts on this site via Twitter @WDX2BB.)
Posted by Budd Bailey at 1:28 PM