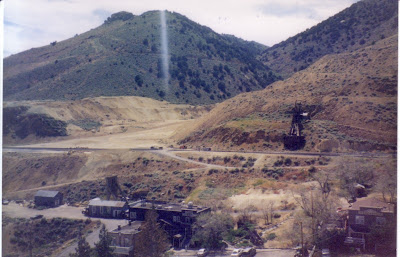 Gold Hill is even closer to the place where the Comstock silver lode was discovered in the 19th century. Virginia City was the main drag of the time, but Gold Hill lingers. It's mostly known now as a stop for the V & T Railroad, but there is a restaurant there. The railroad depot is one of the few buildings that has more or less made it into the 21st century. You can see evidence of the mining in the top half of the picture.
Posted by Budd Bailey at 8:57 PM No comments: 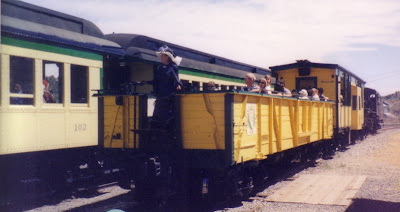 The V&T Railroad is something of a throwback. One train goes from Virginia City to Gold Hill and back, a 4-mile round trip. There's a real steam engine pulling the two passenger cars (one open, one closed) along. It takes about 35 minutes for the whole trip, which is about right, since that gives a nice way to see the countryside as it looks today. Riders even get to go through a tunnel. One warning: you might run into some outlaws who are robbing money (and making bad jokes) for charity, so bring a couple of extra singles along for the ride.

The short run has been so popular that the railroad has added a train to Carson City. That one takes 90 minutes or so one way, and makes a couple of runs a day.

Posted by Budd Bailey at 8:45 PM No comments: 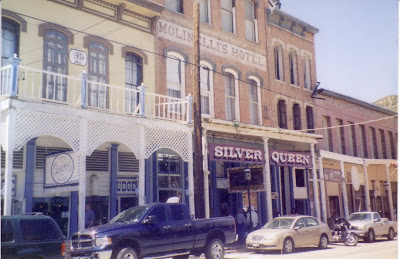 Virginia City used to be one of the richest places in America.

Around 1859, vast stocks of gold and silver were found in the region, which is southeast of Reno. The United States couldn't get it out of the ground fast enough; they needed the money to pay for the Civil War. Lots of people made some serious money through the minerals, and Virginia City became one of the richest places in America.

For a while. And then the gold and silver ran out, and almost everyone left.

After a little work, Virginia City came back to life as a National Historic Site. It's the nation's largest such place, in fact. The buildings along the main drag have been fixed up, and the wood sidewalks remain in place. Yes, you can buy a t-shirt in every fourth store and a beer in every third, but it's still an interesting place for a walk.

There are a few other buildings in the town, and the view to the east goes for something like 100 miles on a nice day. It's worth a stop if you are in the neighborhood.
Posted by Budd Bailey at 8:10 PM No comments: