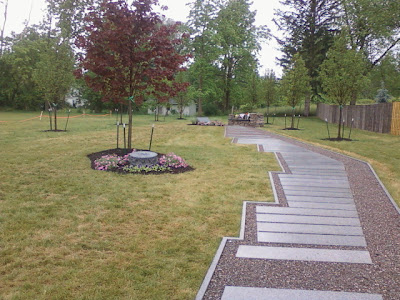 Western New York won't soon forget the night of February 12, 2009. That was the evening when Flight 3407 crashed into a residential street in the quiet village of Clarence Center. All of the passengers and crew on the plane were killed, as were two people in the struck house on the ground. The total was 50.

It's somewhat amazing to think that a plane could fall out of the sky at such a steep angle that only one house would be hit. Yet that's what happened on Long Street that night. An adjoining house was damaged as well and had to be torn down.

Discussions about what to do with vacant land began almost immediately after the clean-up operation began. After three years, a small memorial park was finished and then dedicated on June 2, 2012.

You can see the area above. The outline of a plane's wing is on the ground and serves a walkway to a memorial plaque that lists all the victims. There are markings to show where the struck house was located as well.

Since the crash, some new regulations have been put into effect that hopefully will make air travel safer.

Be notified of new posts via Twitter @WDX2BB.
Posted by Budd Bailey at 11:30 AM No comments: