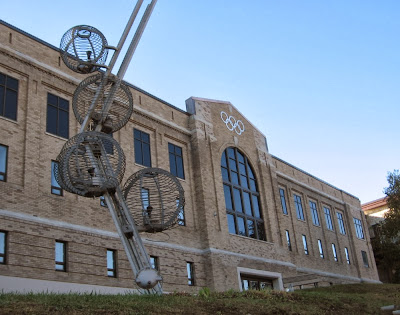 Drive to Lake Placid, and it's easy to wonder how this little village hosted the Winter Olympics ... twice. Those two-lane roads couldn't have been much in the middle of winter. Yes, the Games weren't such a big deal in 1932, but they sure were in 1980. But this place did it, and it rightfully proud of it.

The Olympic Center is in the middle of town, right across the street from Mirror Lake. There's a museum here, and some ice rinks. But it's also the place where one of the most famous hockey games in history was played. Perhaps you have heard of the "Miracle on Ice," in which the United States beat the Soviets in the medal round and eventually went on to the gold medal.It's worth taking the tour just to sit in that arena and chant "U-S-A," as if it is 1980 all over again.

By the way, this building is right on Lake Placid's main street, and it's worth a walk. There are plenty of interesting shops and restaurants there, including an outlet for USA Hockey. The area has become a little more upscale in recent years, for what its worth.

Be notified of new posts via Twitter @WDX2BB.
Posted by Budd Bailey at 6:08 PM No comments: 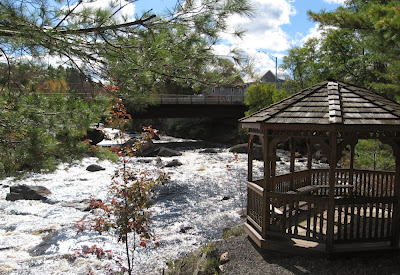 Need a place to stop while driving between Watertown and Lake Placid in order to stretch your legs?

The city leaders did do a nice job on this park, which is located on the Oswegatchie River, which runs 137 miles from the Adirondacks west and then north to Ogdensburg and the St. Lawrence River.

This picture was taken on a very bright day in the fall, so it looks a little like snow on the water. It wasn't, but no doubt this area sees its share of it.

Be notified of new posts via Twitter @WDX2BB.
Posted by Budd Bailey at 5:53 PM No comments: 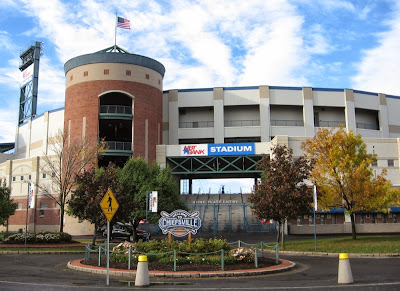 Welcome to the relatively new home of the Syracuse Chiefs, the AAA baseball team that's in the International League.

The Chiefs played in MacArthur Stadium for years and years, but finally got a new playpen some years ago. It's in the same location, more or less as the old place. NBT Bank Stadium seats more than 11,000 fans. I particularly like the "Chiefsville" sign out front.

By the way, the facility is located on Tex Simone Drive. Simone was the longtime general manager of the team, and the Simone name was associated with the franchise for many decades.

Downtown ballparks usually are more to my liking than ones away from the middle of the city. To be fair, this one is near Destiny USA, a huge, huge shopping center, and Interstate 81, so it gets points for convenience in that sense. Parking is plentiful.

Be notified of new posts via Twitter @WDX2BB.
Posted by Budd Bailey at 5:40 PM No comments: 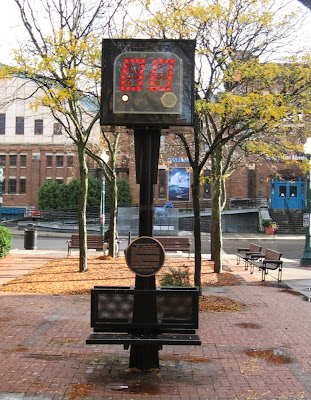 The National Basketball Association had a problem in the 1950s - the games were getting boring.

Teams that thought they were outmatched realized their best chance to win was slow the pace of the game to a crawl. When one contest ended up 19-18, it was time to do something.

Danny Biasone was the owner of the Syracuse Nationals of the NBA at the time, and he attacked matters in a most logical way. A shot clock had been discussed by the league, so Biasone and general manager Leo Ferris counted the number of shots in a well-paced scrimmage staged in a local high school. Sixty shots per game per team seemed about right, so he divided that into the number of seconds in a game. It came out to be 24 seconds, and that became the time limit for shooting.

You probably could argue that it saved the league, which was still struggling financially. The plan was eventually adopted by leagues around the world, and even made it into the college game after a few decades.

Biasone was recognized for his good work with this display near Armory Square in downtown Syracuse. All surviving Syracuse Nationals were invited to the dedication ceremony in 2005. It's on South Franklin St. By the way, Armory Square now houses a museum, and is quite an interesting neighborhood these days with all sorts of restaurants and shops. Looks like it's worth a good-sized visit.

Be notified of new posts via Twitter @WDX2BB.
Posted by Budd Bailey at 5:25 PM No comments: 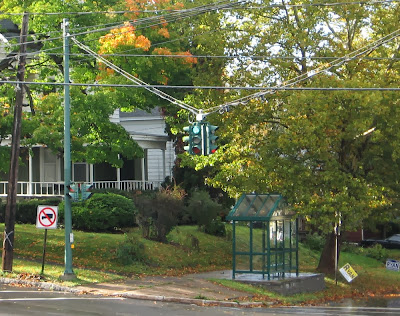 There are all sorts of odd attractions on this web site for visitors. This one is the first one that features a traffic light.

You'll have to look closely through the fall foliage. The top light is lit, but it's green. The red light is on the bottom.

But why? It helps to know that the settlers of this region were mostly Irish workers on the Erie Canal. They weren't too fond of Great Britain at the time, and not too fond of Britain's imperial red color. They took it out on the stop light in West Syracuse but knocked it down or shooting out the light.

A compromise was reached that is unique - the green light was placed on top. It's stayed that way ever since. As you can imagine, this is definitely the place to hang out on St. Patrick's Day.

The intersection is located at Tompkins and Milton in Syracuse, a bit south of I-690 and fairly close to the Zoo.

By the way, while standing on the sidewalk to take this picture, I had the odd urge, if asked what I was doing, to say, "I'm waiting for the light to change."

Be notified of new posts via Twitter @WDX2BB.
Posted by Budd Bailey at 5:09 PM No comments: 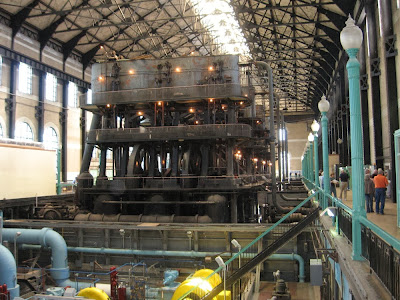 It's always fun to go inside of buildings that aren't usually open to the public. Such was the case with the Colonel F.G. Ward Pumping Station, which had an open house.

The building itself is about a century old, and right at the entrance to LaSalle Park along the waterfront in Buffalo. (Where else should a water pumping station be?) It's a striking structure from the outside.

The citizens of Buffalo thought they deserved better water in the 1890s. It took until 1907, but the state of New York finally took action and started construction. The facility opened in 1915.

Pictured above is the main room, complete with the old five steam-driven engines. Each is capable of sending millions of gallons of water per day through the pipes of Buffalo. Electric pumps were installed in 1938, but the old units were used as backups until 1975. The facility received a modernized look with new controls in 1983.

The old engines still grab your attention, though. They look like something out of a Fritz Lang movie - even with the black-and-white look.

Be notified of new posts via Twitter @WDX2BB.
Posted by Budd Bailey at 5:00 PM No comments: