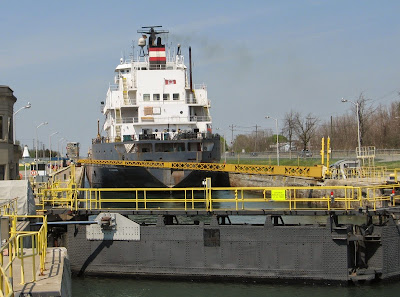 You can see the Welland Canal up close in Port Colborne, the entry point from Lake Erie for those headed East. In fact, one of the eight locks is located here. Seven of them are in the northern part, where the hills are. The eighth is used to make sure the water levels are correct.

There is a park surrounding the lock, as Governor General Ed Schreyer dropped in during 1979 to mark the 150th anniversary of the first Welland Canal. The park has some views of the lock area, as well as skating boarding, walking trail, etc.

We were lucky enough to catch a ship in the lock during our visit. This picture doesn't show how long the ship is, and it's REALLY big, but if you look carefully you can see how little room there is between ship and wall. It looked like a yard or so on either side. The captain of these ships has to be really good at driving, I guess.

Downtown Port Colborne borders the canal as well. There are a couple of blocks of cute little stores that are quite nice and quaint. It's too bad that there's isn't more of that economic development. But it's a small town, so be sure on a nice day to grab and ice cream cone and watch the world, and the ships, go by.

Be notified of new posts via Twitter @WDX2BB.
Posted by Budd Bailey at 1:17 PM No comments: 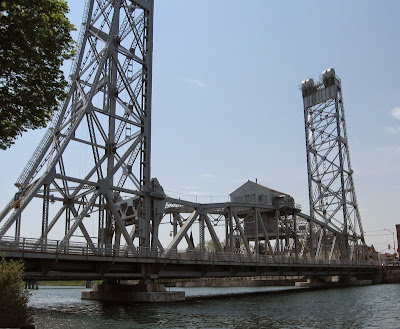 Let's see. We're in Welland, Ontario, some miles southwest of Niagara Falls. We're right in the middle of town, and there's a fine waterway running north-south right through the middle of town. In order to get to the other side, one must take a bridge like this one on Main St.

It would be easy to guess that you were at the Welland Canal, important part of the St. Lawrence Seaway. (Otherwise, ships would be going over Niagara Falls to get to Lake Ontario, and that's not a good idea. It's an even worse idea in reverse.)

Alas, you'd be wrong. This is the old Welland Canal, which closed in the early 1970s. The new canal section is a couple of miles east of here, and it seems to be mostly surrounded by fences. That means it is difficult for tourists to see it. You can drive under it, which is briefly interesting.

This raises a question. If you can't visit the canal while here, why is it called the Welland Canal? My guess is that a number of canals have been built in this region, and Welland has always gotten the credit. Someone did a fine job of marketing here. This list of famous canals in this part of the world is pretty small - the Erie Canal in New York has history going for it - so it would be worth a look if you could see it here. But you have to go elsewhere.

By the way, another part of the old canal has been turned into a spectacular water park, which has held international competitions in such sports as crew and open swimming.

Be notified of new posts via Twitter @WDX2BB.
Posted by Budd Bailey at 1:09 PM No comments: