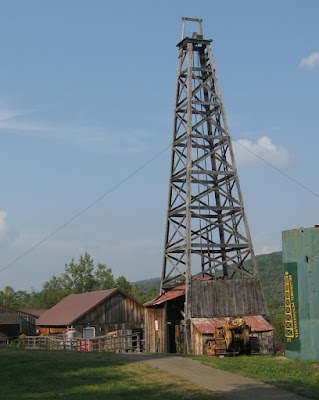 Tucked on Route 219 south of the city is this little museum of sorts - easy to miss as you go buy. It's designed as something of a tribute to the oil business of the region. This part of Pennsylvania is famous for its natural resources; check out Titusville sometime for an even bigger history lesson.

There are some working machines on the grounds that date back to the 1800s. The derrick on the grounds, pictured here, certainly has that old time feeling to it. But the building inside actually is quite modern.

Now, it would be nice to learn more about the place, but the website is, um, shall we say incomplete. If you click on the link, you'll find that most of the pages on the site is filled with what is called "dummy type" - something close to gibberish designed to fill space. So, visitors don't need to go any place other than the home page, which has a brief story of the museum.

Time to update the site, guys, and finish what you started. It might help get attendance above 1,200 visitors per year.

Be notified of new posts via Twitter @WDX2BB.
Posted by Budd Bailey at 9:06 AM No comments: 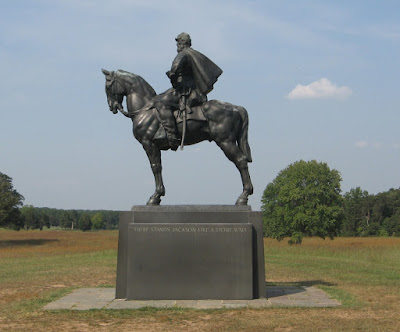 The battlefield at Manassas, Virginia, offers a discount. It was the sight of two battles in the Civil War, but there's only one admission charge.

The name might not be familiar, but the "phrase" Bull Run is known to those with even a passing interest in that conflict. Run is used in that part of the world for stream or creek, by the way.

The first battle of Bull Run took place in July, 1861, and it was essentially the first battle of the Civil War. Most expected the North to win easily and start to put an end to this little uprising. Civilians even took the trip out to the area to watch from the hills. What they saw was a Confederate victory. The Union side made a disorderly retreat that mixed in with others such as Congressmen who looked on from Centerville. The South was in no position to follow up, so the North escaped. But, it was the first sign that there would be no easy victories.

Along the way, Confederate General Barnard Bee took a look at General Thomas Jackson and said, "There stands Jackson like a stone wall." The nickname stuck forever. The statue pictured is where Jackson was at the time of the remark. General Bee, meanwhile, died shortly after speaking those words, and a monument honors him on that spot just a handful of feet away.

A little more than a year later, the two sides met on more or less the same spot. It was a bigger battlefield and a bigger battle. About 3,300 people died in the three-day battle, a shocking number. The South won again, thanks to a great plan by General Robert E. Lee. Full of confidence, Confederate troops headed north ... and fought an even more bloody battle at Antietam.

The National Park has a few statues and monuments on the grounds, and a couple of buildings and bridges uses in the battle are still standing. Luckily, the visitor center has a nice 45-minute movie that explains what happened, as well as a museum with some relics of the battle.

Be notified of new posts via Twitter @WDX2BB.
Posted by Budd Bailey at 8:50 AM No comments: