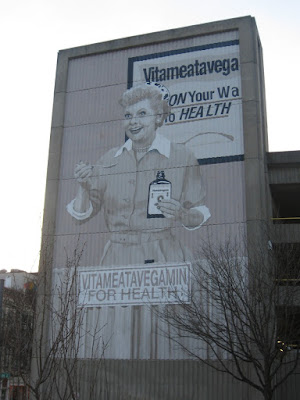 Lucille Ball became a little bigger than life in her career, but not this big.

Jamestown has honored its native daughter with five murals scattered around downtown. They are all done by local artist Gary Peters, and add a nice touch of public art to the area.

The one shown here is the best one. It's a tribute to one of the most famous episodes of "I Love Lucy," in which she becomes a commercial hostess for a health product. The catch is that the serum contains alcohol, and the more takes Lucy does, the more intoxicated she gets. Vitameatavegamin gets pretty mangled along the way.

There are murals of the candy-wrapping episode, one with Lucy and Desi, a replica of the Lucy stamp placed on the wall of the post office, and one across the river from downtown with Lucy, Ricky, Fred and Ethel driving to California.

Be notified of new posts on this site via Twitter @WDX2BB.
Posted by Budd Bailey at 5:25 PM No comments: 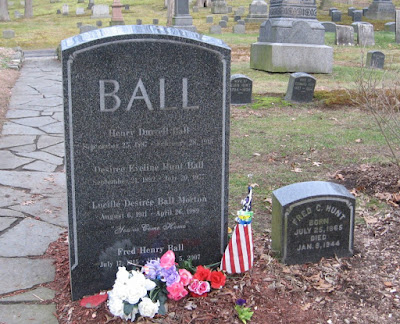 It's rather easy to pay your respects to Lucille Ball during a visit to Jamestown.

The television star died in 1989, and her ashes had been in California. But the family eventually decided that she should be back in her native Jamestown with her original family, and so Lucy's remains were moved across the country.

The cemetery is located north of downtown and just off Route 60. The main entrance is at 907 Lakeview Ave. Drive in the main gate, and look for the faded hearts on the road. (Note to maintenance crew: Time to redo those hearts.) The family grave is fairly close to the entrance, and you can see it from the road if you look down a path.

Be notified of new posts on this site via Twitter @WDX2BB.
Posted by Budd Bailey at 5:16 PM No comments: 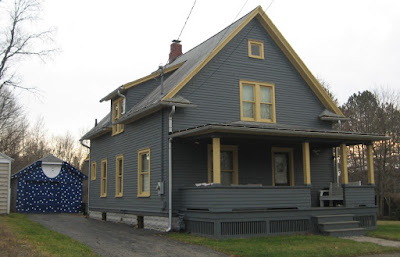 You have to admire the residents of this house at 59 Lucy Lane in Celoron, NY, located just west of Jamestown near Chautauqua Lake.

One of the legendary figures in television, Lucille Ball, grew up in this structure. She wasn't born here - that was relatively nearby at 69 Stewart Ave. in Jamestown. But this was the family homestead.

The house has moved along to other owners over the years. The current ones don't have tours for you to set foot in Lucy's old room or anything, so don't knock on the front door. But they do show their respect for the previous owner. If you look carefully, you'll see that the garage is decorated to look like one of Lucy's polka-dot dresses from the television show, "I Love Lucy."

Genius can turn up just about anywhere, including Celoron.

Be notified of new posts on this site via Twitter @WDX2BB.
Posted by Budd Bailey at 5:08 PM No comments: 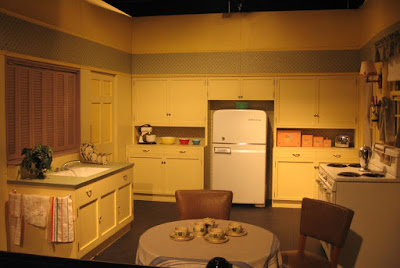 You could argue that this is a replica of one of the most famous kitchens in America in the 1950s.

It's a recreation of the kitchen from the television program, "I Love Lucy," which has been shown every day in some part of the world for almost 60 years.

The set is part of the Lucy Desi Museum, which has become a major tourist attraction in Jamestown.  Lucille Ball was born there, and in the last several years the town has embraced the connection.

The facility has two parts to it. There's as area dedicated to the two stars - a variety of items connected to Lucy and show co-star Desi Arnaz. The family donated several personal items, including clothes, letters and scripts.

Right next door is the Desilu Studios, which has replicas of three of the sets from the show. The other two are the living room in New York City, and the hotel room from California. It all comes back pretty quickly when you see it. Ball's Emmy awards are there (six in all), plus other displays about the program. I have no idea why the two parts of the center weren't connected into one big museum when it was built. But you pay for them both at once, walk through one, and then head outside for a short walk to the other entrance. Naturally, there are souvenir stores in both places.You can rent a device to hear Lucy Arnaz, Ms. Ball's daughter, describe the contents of the museum.

It takes about 90 minutes to go through it all, even if you don't stop at some of the videos, and it's certainly a loving tribute.

Be notified of new posts on this site via Tiwtter @WDX2BB.
Posted by Budd Bailey at 5:00 PM No comments: 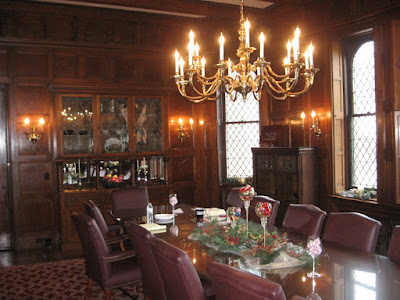 The Robert H. Jackson Center in Jamestown, New York, is unique. It's the only place in the country that honors the memory of a Supreme Court Justice in such a way.

The Center is located in downtown Jamestown. It's an old mansion, built by the Kent family in 1859-60, that has been updated for use in this way. The main part of the building has offices and meeting rooms. A room looking out of the front of the building quite well done. Then there's a room named after Ulysses S. Grant, who visited Jamestown once. The room, pictured here, is great for meetings or small functions. It does feel like an old, nice mansion.

An area that used to be the barn once upon a time has been converted in meeting areas. There's a fine theater that seats 200 people, and can be used for movies, speeches, etc. Down below it is a room that seats perhaps 120 for banquets, etc.

Jackson had an interesting life, which is remembered here. He was a good lawyer once upon a time when he had the chance to become friends with Franklin Roosevelt. Obviously, FDR had a high opinion of Jackson's talents. Eventually, Jackson was named Solicitor General, Attorney General, and Supreme Court Justice - all within a few years. When President Harry Truman needed someone to conduct the war trials of several Nazi leaders after World War II, he picked Jackson - who by all accounts did a superb job. Jackson went back to the Court when that job was done, and was putting together am excellent body of work when he died in his early 60s in 1954 - right after being part of the famous Brown vs. Board of Education decision that ended legal segregation.

There are interesting items sprinkled around the building. For example, one hallway has the framed autographs of every Chief Justice of the Supreme Court. Two books on Jackson were sent to current Justices, with the request that one be autographed and returned for display. They all did so, some with interesting notes. Posters about some of those tried in Nuremberg line the walls of the banquet room. It's a rather chilling story.  Jackson's desk in Nuremberg was pulled out of storage by the military, and his chair from his Supreme Court days is also there.

One last note - a docent usually is around to give tours. The staff couldn't have been more friendly to visitors.

It obviously helps to have an interest in history to go to a place like this, but this really is an appropriate tribute to one of Jamestown's native sons.

Be notified of new posts on this site via Twitter @WDX2BB.
Posted by Budd Bailey at 9:49 AM No comments: