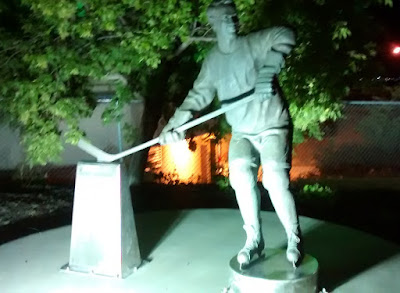 You'd expect Saskatoon to be proud that Gordie Howe was raised within its city limits, and it is.

After all, this is Canada, where hockey holds an important place in the culture. And Gordie Howe is on the list of the five best hockey players in history.

Howe wasn't born in Saskatoon, but he moved there when he was nine days old. He stayed through his teen years, when he dropped out of school and went on to pursue a hockey career. You'd have to say that worked out pretty well.

By coincidence, Howe died less than a week after this picture was taken. I'm sure there will be plenty of tributes to the great player and fine gentlemen there in the coming weeks.

The status of Howe is located right outside of the SaskTel Centre, where the Saskatoon Blades play junior hockey. Make sure you look for it during your visit. Saskatoon also has a park and arena named after Howe.

Be notified of new posts on this site via Twitter @WDX2BB.
Posted by Budd Bailey at 3:27 PM No comments: 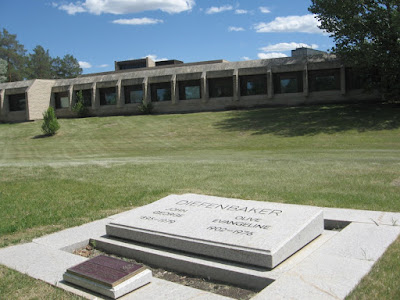 Here's a question that natives of Saskatoon can debate over a cold adult beverage: Who is the city's most famous native son or daughter?

They all made an impact in their own way. We'll stick to Diefenbaker here. He was Canada's leader from 1957 to 1963. As a silly aside, we used to play the Canadian version of Trivial Pursuit in the 1980s (the game was invented there). When a political question came up and we had no idea, "John Diefenbaker" was our emergency answer. You'd be surprised how many times it was right.

Diefenbaker was born in Ontario but moved to the Northwest Territories at a young age. Eventually John wound up in Saskatoon, as his parents thought the education of their children would be better there. He went to the University of Saskatchewan in that city. After spending much of his life in government, Diefenbaker died in 1979.

His papers were sent to his alma mater, and they are kept in the Diefenbacker Centre - which you can see in the background. A replica of his office from his days as Prime Minister are part of the complex.

Be notified of new posts on this site via Twitter @WDX2BB.
Posted by Budd Bailey at 3:15 PM No comments: 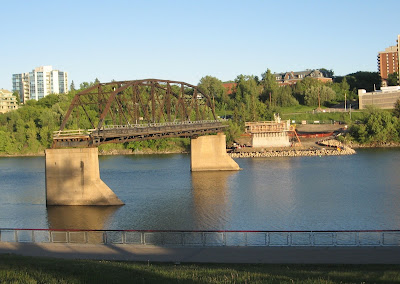 Talk about a bridge to nowhere.

This is a portion of the Traffic Bridge in Saskatoon, which crosses the South Saskatchewan River from downtown. The rest of it is gone. As you'd expect, there's a story involved.

This bridge lasted for more than 100 years. It was built to unite the towns on both sides of the river, with the idea of putting together one big city called Saskatoon. This was the price tag for that merger, as the ferry service wasn't particularly reliable.

The Iron Bridge, which became known as the Traffic Bridge, served residents for decades. But the winters can be a little harsh here, and engineers finally pronounced the bridge as unsafe in 2010. There are plans to replace it in the relatively near future, but first the old bridge has to go. A couple of portions of the Traffic Bridge have been imploded, but as of the summer of 2016 there was still a good-sized chunk of it left.

The Traffic Bridge has a good-sized entry on Wikipedia. Here's a look at how the implosion looked:

Be notified of new posts on this site via Twitter @WDX2BB.
Posted by Budd Bailey at 3:00 PM No comments: 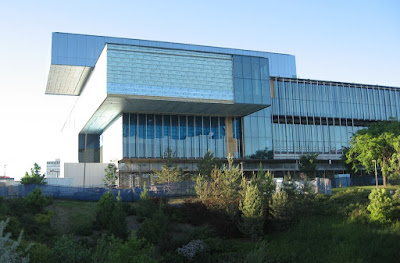 Here's a look at Saskatoon's cultural future, at least as written from the perspective of the summer of 2016.

It's the Remai Art Gallery, which will become the most important museum of its kind in the city when it opens sometime in 2017. The Mendel Art Gallery closed in 2015, so residents are counting the days until this cultural center opens.

The building itself was rather close to completion during our visit. But it's not easy to move 8,000 pieces of art from one place to another. Gallery officials say they are moving the process along as quickly as possible.

Once it is open, visitors will be able to see the Picasso linocut collection - said to be the largest in the world, and worth $20 million. And it's a fine location, right along the river, and the building's design is impressive. Here's hoping everything works out for the city.

Be notified of new posts on this site via Twitter @WDX2BB.
Posted by Budd Bailey at 2:35 PM No comments: 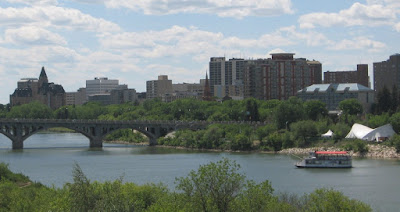 Welcome to "the Paris of the Prairies."

OK, there's no Eiffel Tower in sight, and Mona Lisa doesn't live here. Still, Saskatoon is a nice, pleasant city located north of East Montana. It's the biggest city in Saskatchewan, and the spaces get mighty open when you go north of here.

Saskatoon's major physical feature is that it is flat. This is the true prairie of Canada. In other words, what a great place for a marathon. The city of 200,000 is more or less surrounded by farm land; you can see all of the rectangles as you fly in. There aren't many curves in the roads outside the city.

Snow apparently isn't a huge problem here, but it does get cold in the winter. Temperatures dip blow 20-below (F) a few times a year here. I would imagine that when the wind comes across the Rockies, across Alberta and into Saskatoon, it can get REALLY cold. On the other hand, summers seem to be fine and appreciated.

Here's a picture of the City Centre, perched along the South Saskatchewan River - which, by the way, eventually goes into Hudson's Bay. It's not a big downtown area, but there is a pretty healthy business district.

Be notified of new posts on this site via Twitter @WDX2BB.
Posted by Budd Bailey at 2:21 PM No comments: