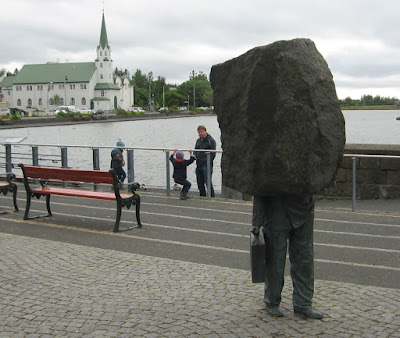 Now here is some public art with an interesting point of view.

Lots of countries have tributes to unknown soldiers. Iceland pays tribute to public officials with this work near City Hall. It was done by Magnus Tomasson, and it translates to "The Unknown Bureaucrat."

We had called this statue "Blockhead" upon seeing it, but the official title works even better. Nicely done, Magnus.

Be notified of new posts on this site via Twitter @WDX2BB.
Posted by Budd Bailey at 6:21 PM No comments: 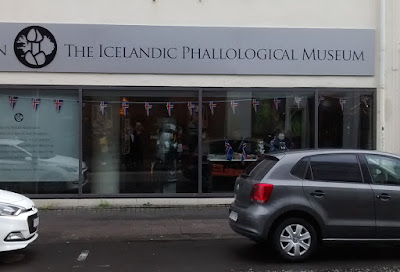 This museum started because of the interest of Sigurður Hjartarson, who was given a bull whip made out of a cattle's penis. This led to collection of specimens from 93 different types of animals.

The museum has received all sorts of attention over the years since its opening about 20 years ago. It is located in the main shopping district.

Sadly, when I went by it, the museum was scheduled to close in only 10 minutes. Therefore, it wasn't worthwhile to pay $10 to visit. But you could see the gift shop from the sidewalk. Let's say there are several unique items for sale, including key chains and t-shirts.

Be notified of new posts on this site via Twitter @WDX2BB.
Posted by Budd Bailey at 6:15 PM No comments: 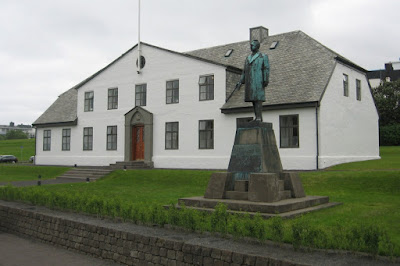 This nifty building right in the middle of things in downtown Reykjavik originally was a prison. The prime minister lived right across the street, so he saw it every time he went out the front door.

After a while, the PM thought this was too nice of a building for criminals. So a switch was made, and the prime minister made it his own home. I'll let you try to pronounce the name of it.

The sculpture is of Hannes Hafstein, a native of Iceland who was appointed to Denmark's Cabinet in 1904. Since Iceland didn't become a country of its own for 38 years from then, this was a big deal. That's why he is on stamps and bank notes.

Be notified of new posts on this site via Twitter @WDX2BB.
Posted by Budd Bailey at 6:00 PM No comments: 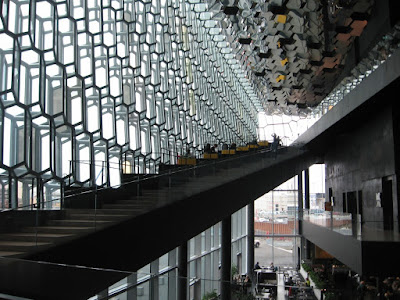 The story of Harpa is that half a loaf is better than none.

Reykjavik had big plans for a waterfront complex in the 2000s. a concert hall, hotel, apartments and bank headquarters were part of the plan. Then came the financial crunch in 2008. As you might remember, Iceland was the canary in the coal mine for that meltdown, having economic problems before anyone else.

Suddenly, the government didn't have funds for big projects. But it decided to at least finish the concert hall, which had started construction. Harpa opened in 2011, and it is occupied just about every night. The unique walls reflect the sky and the ocean, and there is some public art on the grounds. You get an idea about the facility in this photo. Public tours are available for a fee.

Be notified of new posts for this site via Twitter @WDX2BB.
Posted by Budd Bailey at 5:45 PM No comments: 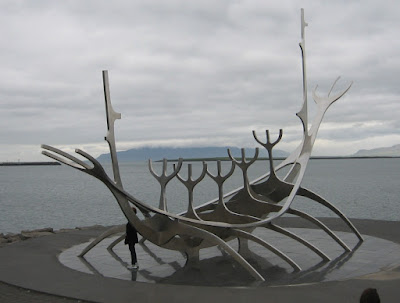 There are many ways to celebrate a birthday. Reykjavik decided to do it by commissioning a big piece of public art in 1986.

Say hello to the "Sun Voyager," which was placed on the waterfront in 1990. Jon Gunnar Arnason did the heavy lifting here, an "ode to the sun."

Sadly, Arnason died in 1989, just before his project was seen in public. It looked like a steady stream of visitors came to see it and take pictures during our visit.

Be notified of new posts on this site via Twitter @WDX2BB.
Posted by Budd Bailey at 5:34 PM No comments: 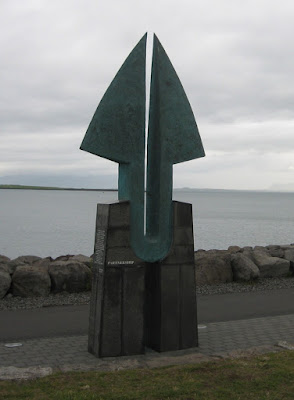 This sort of looks like a harpoon, and for good reason. It's a gift from the United States to Iceland in tribute of 50 years of friendships between the countries, as the sea between them has helped bring them together.

The sculpture sits on the Reykjavik waterfront, and there's an identical structure sitting in South Florida. The idea is to link the Gulf Stream that connects the two countries in a sense. The two sculptures went public in 1991.

Be notified of new posts on this site via Twitter @WDX2BB.
Posted by Budd Bailey at 5:21 PM No comments: 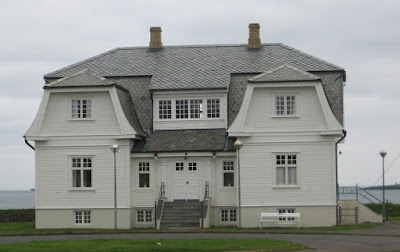 Iceland isn't filled with buildings of historical significance to the rest of the world, but this one certainly qualifies.

Hofoi was the site of the meetings between Ronald Reagan and Mikhail Gorbachev in 1986. The leaders of the U.S. and U.S.S.R. met about halfway between the two countries, which put them in Iceland. The host country would like to think that the agreements reached in this building started the world on the road toward the end of the Cold War. And Iceland has an argument.

There is a statue near the house on the grounds to Einar Benediktsson. The beloved poet and businessman used to live here. The building also has served as the British Embassy. It is now used by the city for formal functions.

Be notified of new posts on this site via Twitter @WDX2BB.
Posted by Budd Bailey at 5:10 PM No comments: 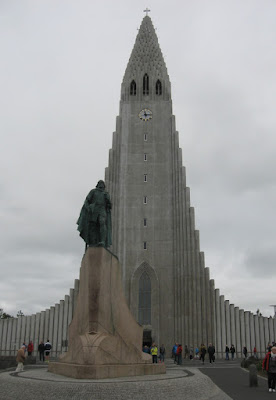 We start the tour of Iceland, appropriately, with one of the most photographed places in the country. Hammgrimskirkja is a church in Reykjavik, sitting majestically on top of a hill.

It was designed by Rev. Hallgrimur Petursson, who wrote hymns and was a distinguished scholar. The building's designer Guojon Samuelsson, never lived long enough to see the building completed. He died in 1950; the building's construction began in 1945 and stopped in 1994.

The church has a huge pipe organ inside; it must be very impressive. The seats can be turned around, depending on the building's use at a given time. When we were there in midweek, half of the seats were pointed at the altar and the other half viewed the organ end.

Just above the clock, you can see three windows in the picture. That's an observation desk with some good views of the city. There's a fee for the cramped elevator ride up to the top.

Visitors are greeted by a statue of Leif Eiriksson. This structure was a gift by the United States to Iceland, in recognition of the 1,000th anniversary of Iceland's Parliament. It's also something of a nod to Eiriksson, who beat Columbus to the New World by a few hundred years. Yet it's Columbus who gets the national holiday in America.

For an essay on all of Iceland, click here.
Be notified of new posts on this site via Twitter @WDX2BB.
Posted by Budd Bailey at 4:47 PM No comments: