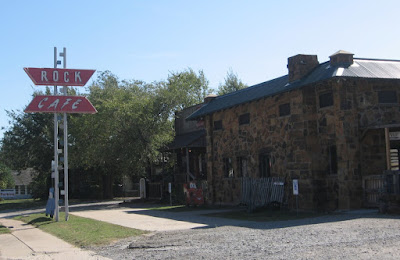 You gotta eat somewhere when driving down Route 66. The Rock Cafe is a good spot for that.

As you could guess, it's been around forever - at least in terms of Route 66. The food is fine, the waitress is friendly, and so on.

The Rock Cafe's claim to fame, though, is a movie connection. Some people from Pixar visited the place in 2001, and immediately started to work on using images and a character ("Sally the Porsche," if you are curious) from the place for their movie, "Cars." The sign might look a little familiar in that sense. The inside has some souvenirs of the film.

We happened to be there when a couple of businessmen were driving a stretch of Route 66 in an attempt to call attention to a device that tries to improve communication between hearing and deaf people. Think of two laptops tied together, so that you can type your words so that both will see it. It's actually an interesting concept, perfect for young people who send texts and Facebook messages. (Old folks who don't type might have a tougher time.) The two representatives were quite nice, and gave us t-shirts for our trouble.

By the way, the bathrooms are filled with graffiti, so bring a pen when you do your business. Even the hallway has a ton of message. Be polite, and the staff will leave it up.

Be notified of new posts via Twitter @WDX2BB.
Posted by Budd Bailey at 4:26 PM No comments: 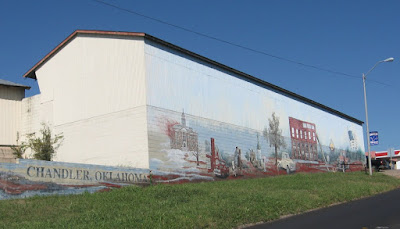 For those driving between Oklahoma City and Tulsa, Chandler probably is the biggest city along the way. It has a little history, and there are enough people around to make it all work as a town.

You may know a little about how people lined up on the borders of parts of Oklahoma to get free land. Chandler had its own land run in 1891. A mere six years later, a tornado ripped through the town and caused all sorts of damage. There are 12 buildings still upright from that day, and they are listed on the National Register of Historic Places.

The scene pictured above is something of a welcome to travelers coming in from the West. There's a mural of the Route 66 sign painted on the wall a few dozen feet west of the scene shown. There are some old signs still on brick walls in town, including a hotel (the space is now partially filled by a karate school). And in the middle of town, work is progressing on fixing up an old Phillips 66 cottage-style filling station. The shell looks good, but there's nothing inside yet. Might be a good stop for tourist information some day.

Be notified of new posts on this site via Twitter @WDX2BB.
Posted by Budd Bailey at 4:12 PM No comments: 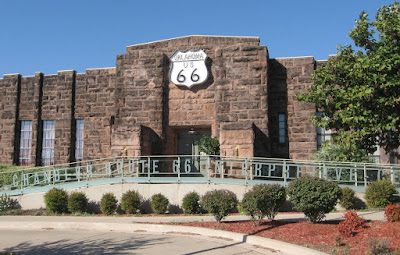 This place certainly makes a good entrance when it comes to luring tourists inside. It's a former Armory, built during the 1930s. They say the walls are 20 inches thick, so this place will be here for a while.

The Oklahoma National Guard left it in 1971, so the decision was made some years later to turn it into the Route 66 Interpretive Center. If you are wondering that exactly that is, well, you probably aren't alone.

There are a few relics from the golden age of Route 66, but the heart of the exhibit is the videos that are available. You can even sit in car seats or lay on replica beds and watch them.

At least in theory. When we were there, about two of the six videos were actually working. Without those, it's fair to say the value of the visiting experience was lessened considerably.

The gift shop had some interesting items, and the one employee was friendly, so that helped. It looked like the rest of the building was used for a variety of functions, as there is a big hall in the back and a nice meeting room.

The official website has more information. Assuming the video machines get fixed, it's worth a stop.

Be notified of new posts on this site via Twitter @WDX2BB.
Posted by Budd Bailey at 3:59 PM No comments: 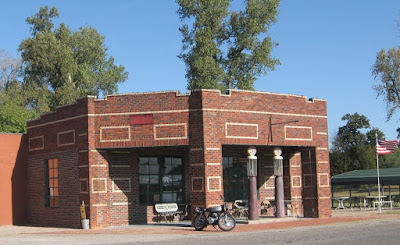 You have to be alert to come across the top tourist attraction in Warwick, Oklahoma. It's a restored filling station on Route 66, and it contains the owner's personal motorcycle collection.

This building has gone through a variety of lives over the years. It opened for gas in the 1920s, even before Route 66 opened for business. From there it went into engine repair, and then turned into something of a gift shop. And now, it's a motorcycle museum.

We aren't too interested in motorcycle history, but some of you certainly are. A stop for those people, then, is definitely in order. A visit to the website might fill in some gaps too. They need a little updating, since there's a page that talks about something planned for 2010.

Be notified of new posts on this site via Twitter @WDX2BB.
Posted by Budd Bailey at 3:40 PM No comments: 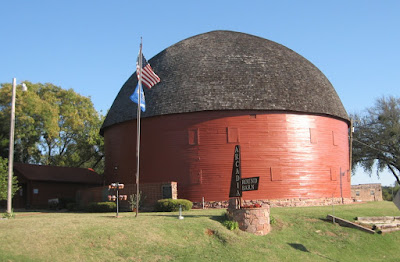 We've missed out on the full effects of an attraction a few times because we arrived just after closing time. In this rare case, we were too early - the Old Round Barn wasn't open for business yet.

Oh well. It still makes quite a sight on the old Route 66. Apparently it dates back to 1898. The roof collapsed a little less than 20 years ago, but a bunch of people chipped in and got it fixed.

I'm told there's a small souvenir shop, and that it is a steep flight of stairs to see the top of the barn. Oh well. Next time I'll have to sleep in a little later.

Here is a link to the official details of the place.

Be notified of new posts on this site via Twitter @WDX2BB.
Posted by Budd Bailey at 2:56 PM No comments: 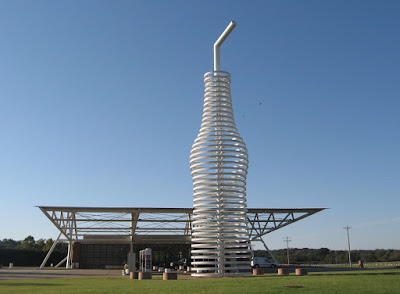 Our first stop during a relatively short drive down the old Route 66 (now state road 66 in Oklahoma) is the iconic Pops store, located a bit northeast of Oklahoma City.

The bottle in front of the store lights up, so it might be beautiful after sunset. But it's quite a scene even at 9 a.m., when we were there. The statue is, of course, 66 feet tall.

This is essentially a convenience store with a small restaurant and gas station. The selling point is that there are close to 500 different types of soda pop there. I don't known if Ho Jo Cola is represented, but they certainly have lots of choices. (Bring a bottle opener if you are come.) This list is said to include Chicken Wing cola. They do have a few souvenirs, including the best sweatshirt I saw on Route 66.

By the way, Pops also has a couple of outlets in the Oklahoma City airport. You can get a few different flavors of pop there, although the choice doesn't compare to the home store.

Here's the video on the store:

Be notified of new posts on this site via Twitter @WDX2BB.
Posted by Budd Bailey at 2:39 PM No comments: