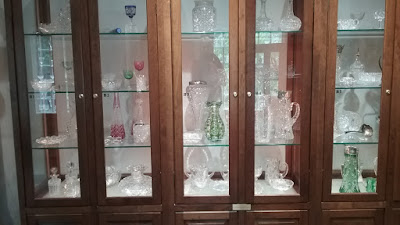 All right, this is a slightly odd tourist attraction.

Dorflinger was one of the biggest manufacturers of cut glass in the country in the 19th century. Starting around 1860, the company in Northeast Pennsylvania made beautiful products that was used by the rich and famous around the country - including some Presidents.

It worked for about 50 years. But when founder Christian Dorflinger died in 1915, the company started on a path downhill and soon went out of business.

The land was turned into a wildlife sanctuary. At some point in the 1980s, it was decided that a museum dedicated to preserving the land's glass-related heritage should be created. The Museum was opened to the public in 1989.

Therefore, it took almost 70 years to salute the past in this way. There are a couple of rooms with some beautiful items located in the museum, and the traditional gift shop is at the far end of the building. Admission was only $5 during our visit. If you like this sort of thing, it might be worth a stop if you happen to be in the region.

Be notified of new posts on this site via Twitter @WDX2BB.
Posted by Budd Bailey at 4:39 PM No comments: 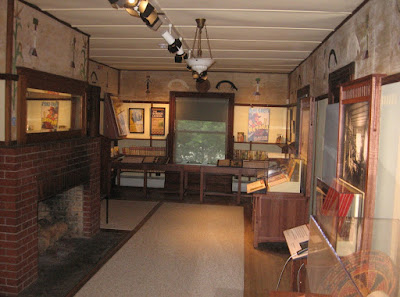 Zane Grey thought he was going to be a dentist at one point in his life. He had used his baseball skill to get a scholarship to Penn's dental school, and graduated in 1896. Grey played baseball and practiced a little dentistry for a few years.

Then he moved to rural Pennsylvania, where he wrote about his life in the outdoors. After giving up dentistry, Grey got married in 1905 and headed west on vacation ... and fell in love with that region. He started writing books about the West ... and books, and books, and more books. Grey stayed until 1918, before Hollywood called. It seems the moviemakers liked Grey's work as source material.

The so-called "Father of the Western Novel" worked until his death in 1939. The house back in Pennsylvania was sold to a family friend, who eventually turned it into a Zane Grey museum. And in 1939, the building was sold to the National Park Service, which maintains it today.

It's a great spot, right on the Delaware River. The bottom floor is open to the public, with several decorations still intact. The main room is shown in the photo here. A gift shop is part of the place too. There is no admission charge.

By the way, Grey was born in Zanesville, Ohio, and a museum about him is maintained in nearby Norwich.

Here's a view of the grounds in PA that I couldn't have shot:

Be notified of new posts on this site via Twitter @WDX2BB.
Posted by Budd Bailey at 4:27 PM 1 comment: 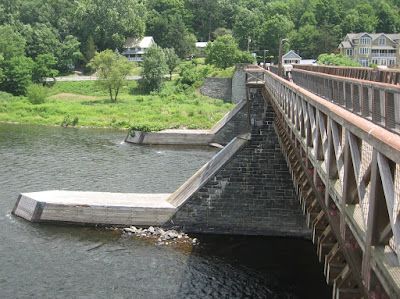 Does the name John Roebling mean much to you?

It does if you have gone over the Brooklyn Bridge ... or at least seen it.

Roebling designed that masterpiece, and he did this one too. It crosses the upper Delaware.

The bridge was originally the Delaware Aqueduct, and constructed in 1847. It's the oldest wire suspension bridge in the country. Back in the day it eased traffic on the river, as timber often was floated downstream to Philadelphia. The bridge connects Minisink with Lackawaxen, Pennsylvania. The place received a facelift, courtesy of the National Park Service about 20 years ago.

The pillars at the bottom of the bridge are designed to break up the ice. On top, there are two paths for pedestrians, and a one-car lane for people to use when driving from one state to another.

It's all very impressive, and you might see some eagles if you go for a walk to the other state.

Be notified of new posts on this site via Twitter @WDX2BB.
Posted by Budd Bailey at 4:15 PM No comments: 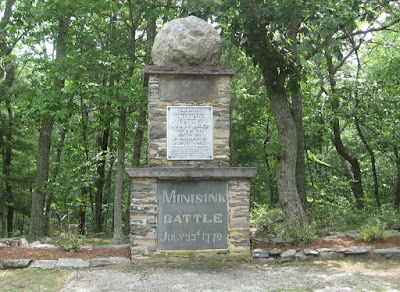 Sullivan County (NY) is located near the point where New York comes together with Pennsylvania and New Jersey. It might surprise you to know that it only had one battle during the entire Revolutionary War.

It didn't go so well for the good guys.

Lt. Col. Benjamin Tustin led a relative handful of American troops into the region. As advertised, it didn't go so well. The Colonials were routed, and the British suffered relatively minor losses. We are talking less than 200 soldiers in all, so this was not exactly a major battle. But since it is the only battlefield of that era, Sullivan County turned it into a park. You can see a monument to perished on the hiking trail, as well as some key landmarks in the immediate area. It's a nice place to collect a little history and have a pleasant walk.

Brant, by the way, kept going. But he ran into bigger forces just east of Elmira, and was defeated.

Be notified of new posts on this site via Twitter @WDX2BB.
Posted by Budd Bailey at 3:59 PM No comments: