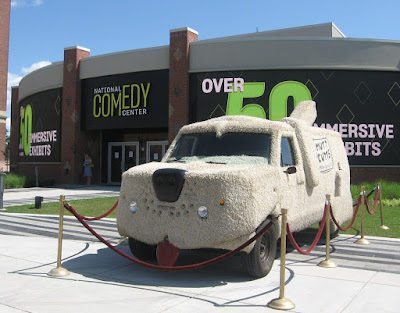 If you build it, they will come.

That was the idea behind the National Comedy Center. Jamestown had enjoyed some success with its Lucy-Desi Museum, thanks to the happy coincidence that comedy great Lucille Ball happened to be born in the upstate New York City. Why not think bigger? Why not a celebration of comedy in all its forms?

Those thoughts came up around 2010. It took several years and several million dollars, but the National Comedy Center opened for business in August 2018. That means as of this writing, it is celebrating its first anniversary.

And after touring it, you'd have to say everyone involved did a wonderful job in creating a fabulous tourist attraction.

Jamestown remodeled an old utilities building for the Comedy Center, and also took over the old train station for its gift shop. (Be sure to look up at the railroad markings while you are searching for souvenirs.) It looks small, but it takes several hours to visit it minimum.

There are sections devoted to business leaders, cartoons, television, film, internet, awards, etc. There's even a "blue room," devoted to those who have pushed the envelope of good taste over the years. It's all done in a state-of-the-art way, beginning with your entrance into the Center. Visitors answer some questions, and then tap a wristband that has a computer chip attached. That is supposed to personalize the experience somewhat.

Along the way, there are bunches of exhibits, videos, audio clips, etc. You can see the Smothers Brothers' suits, Harpo Marx's trench coat, and Rose Marie's pink dress from the Dick Van Dyke Show. A room currently is devoted to the work of Ernie Kovacs, who was born in 1919. That exhibit will stay up for a year.

It adds up to a wonderfully entertaining experience. If you are in the neighborhood, go - and stop in on Lucy and Desi down the street if you have time. Let's hope this new museum helps make Jamestown "the Cooperstown of Comedy."

(Find about new posts on this site on Twitter @WDX2BB)
Posted by Budd Bailey at 4:20 PM No comments: 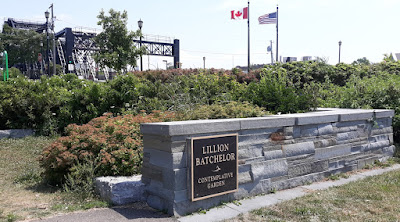 You never know what you might find while taking a walk.

Recently we tried to take a stroll on the full length of the Bird Island Pier, only to discover that much of it had been closed for repairs. So we walked through Broderick Park, and stumbled on something that was totally unknown to us.

The Lillion Batchelor Contemplative Garden popped up right behind the food hut in Broderick Park. It was dedicated in 2016 as a tribute to one of Buffalo's leading historians. Batchelor has been studying the stories that make this spot the last stop on the famous Underground Railroad. In fact, she's managed a recreation of the voyage of some of the ships.

It could use a little care, but the view is excellent and it looks like a nice place to sit and watch the water go by.

Besides, you never know who might drop by. In our case, one of Lillion's daughters was showing a friend the park area. We asked if she did this a lot and the response was, "Not as much as you might think, or as much as I probably should."

There is a small amphitheater nearby, and the sidewalks are in good shape. It's a great spot for a summer stroll.
Posted by Budd Bailey at 1:21 PM No comments: 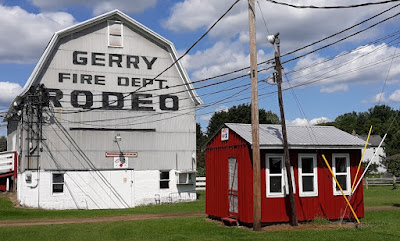 Indeed. Once a year, Gerry turns into the rodeo capital of Upstate New York.

You should know for starters were Gerry is. It is a few miles north of Jamestown in the southwestern corner of New York, not far from Interstate 86.

Back in 1945, it seems that Jack Cox, an ex-cowboy, moved to Gerry. He thought the rodeo would be a great way to raise money for the village's volunteer fire department.

The idea was a hit. An area was put together in almost no time (70 days), and Gerry was in the rodeo business. The 2019 edition was No. 75 in its history, quite an occasion.

It was also a chance to have some fresh barbeque in an enclosed dining room with some special sauce, naturally. The formula apparently worked well.

We were about a week late in visiting Gerry. Oh well. The rodeo area itself has grandstands on both sides of a dirt area that is probably a bit longer than a football field. One of these years ...

Yeehaw!
Posted by Budd Bailey at 1:09 PM No comments: