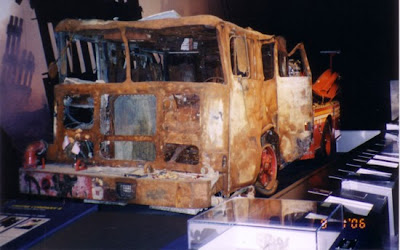 As part of the Empire State Plaza complex, the State has set up a museum to give a crash course in all things New York. Now, New York is a pretty big, diverse state, and the museum is pretty small. Most of it is devoted to two exhibits: New York City and the Adirondacks. Those who go through it probably will feel a little left out if they are from, say, Buffalo.

While most of the museum isn't particularly interesting, the exhibit devoted to Sept. 11, 2001 does jump out at the visitor. Here is what's left of a fire truck that was called into service in New York on that fateful day. There are other remains as part of the exhibit, which is moving.

By the way, there is no admission charge.
Posted by Budd Bailey at 12:31 AM