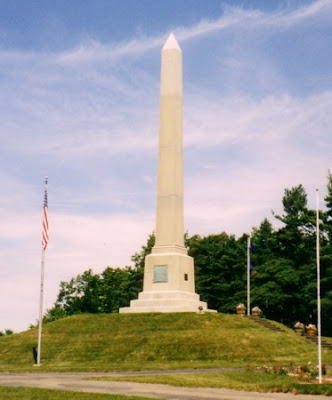 Sometimes, you have to visit a town that you once lived in to see one of its tourist attractions.

Here's a tribute to General John Sullivan in the form of Sullivan's Monument at Newtown Battlefield. It's located just east of Elmira, right off Route 17, up the hill.

During the Revolutionary War, several soldiers fought the British and Indians in the Chemung Valley area. After the battle, some of the soldiers essentially decided they liked the place so much that they stayed there.

The momument has a nice view of the valley below on a good day, and there are some picnic grounds on the site. Too bad I don't remember going there when I attended five years of school there while I was growing up.
Posted by Budd Bailey at 12:04 AM