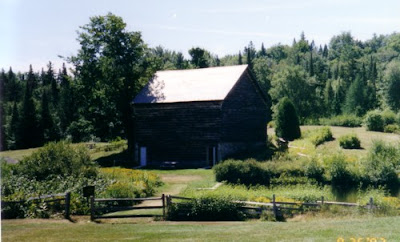 Most people have at least heard of John Brown, the relatively famous pre-Civil War abolitionist. They just don't know much about him. A trip to his farm in Lake Placid, then, is instructive. Friendly guides (you get the idea they appreciate the company) are happy to tell Brown's life story. It's easy to conclude after hearing it that Brown was something of a nut.

Well, what would you call someone who heard about a fight in Kansas over the slavery issue, so he packed up a few belongings and headed west ... leaving his wife behind to run the farm? Maybe nut is extreme. Maybe "bad husband" works better. Brown was killed around Harper's Ferry, WV, in a celebrated incident (he apparently wrote some major newspapers and told his story while he was waiting for the court case) and he is buried by the farm here.
Posted by Budd Bailey at 9:17 PM