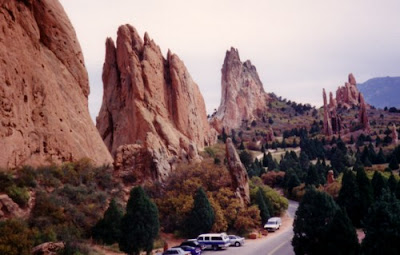 Two surveyors are walking around the area shown above in 1859. One suggests that it would be a great place for a beer garden. The other, apparently the more serious of the two, says it's fit for the gods. So it became the Garden of the Gods, a prime stop while visiting Colorado Springs.

The place has been a public park since 1909, although it has been open to the public for an even longer period. It is located at the base of Pike's Peak. A movie is shown at the visitors' center that explains of geology of the region.

Don't be surprised if you start humming "America the Beautiful" when you are in the area.
Posted by Budd Bailey at 1:44 PM