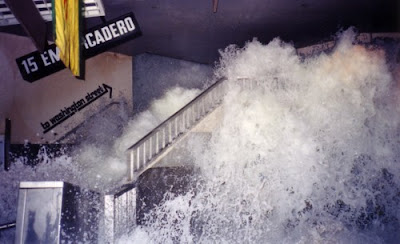 As if there wasn't enough to do in the Orlando area once Disney World opened, Universal Studios raised the stakes a bit. One Disney employee told me that his company was actually happy to have the competition; otherwise, Disney World might have been forced to be open 24 hours a day because of the crowds.

Universal Studios has all sorts of rides that will get your attention. This is one of them: Earthquake : The Big One. Visitors go into a replica of a subway station when an 8.3 earthquake strikes. Ceilings collapse, fires erupt and subway cars collide. As you can see above, lots of water gets recycled for this one.

My favorite ride is "Back to the Future," in which you're almost convinced that you are flying in a spaceship. I think the ride cost as much as the three movies combined, and it's worth it. One tip: if you get dizzy, look to the side to become grounded. For the rest, hang on!
Posted by Budd Bailey at 9:10 PM