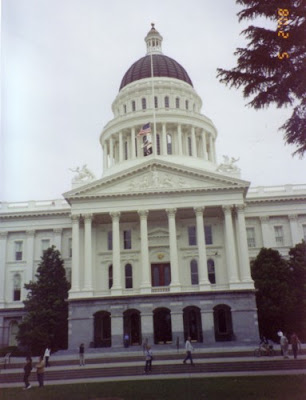 Most states have an impressive Capitol building, if only to copy the big one in Washington. California's version in Sacramento certainly qualifies.

It was judged completed in 1874, although the building was partially occupied in the years before that. It also has been fixed up a couple of times on a massive basis, the latter coming in the late 1970's.

Tourists can take a tour and see the place. It ends in the Governor's office, although he didn't come out to greet us. But they also get to see the paintings on a wall, which no doubt grabbed your attention.

One of the lobbies has pictures of the last several governors. On the far left of the hall is Ronald Reagan. The painting looks like a photograph. He's on the grounds, looks great with a big smile. You'd want to vote for him just for that. And next to him is Jerry Brown, whose official portrait is a bit more, um, minimalist. It could have been done in crayon. Almost worth the tour just to see those two paintings.
Posted by Budd Bailey at 5:53 PM