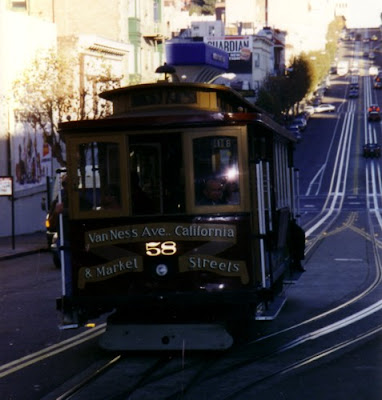 It's not easy to get around San Francisco ... and it wasn't easy in 1873 either, when the roads weren't in perfect shape. That's when cable cars were introduced to the city, and they never left.

The cable cars came close to disappearing. The 1906 earthquake damaged the system, so that was a good time to install electric street cars. Then there was talk of doing away with them in 1947, but the public voted to save the system. In 1964 it was designated as a moving national landmark. Now it's a must for every first-time visit to San Francisco.

You might say it's a San Francisco treat to ride it. Ding ding!
Posted by Budd Bailey at 5:51 PM