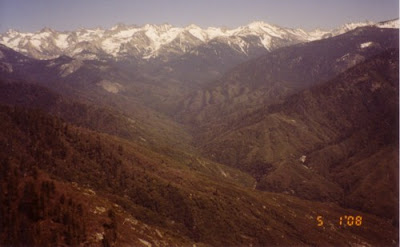 Moro Rock is the place to do it. The Rock juts out a bit into the canyon formed by the middle fork of the Kaweah River. After going up 355 steps (I counted), which luckily has some railings because you'll need them, you'll get to see one of the most spectacular views in the park.

These mountains are actually the divide of the Sierra Nevadas, as in on one side the water goes to the Pacific and the on the other side it goes toward Nevada. Mount Whitney, the tallest mountain in the lower 48 United States, is part of this range, although it takes a hike to see if when visiting this part of Sequoia National Park.
Posted by Budd Bailey at 5:42 PM