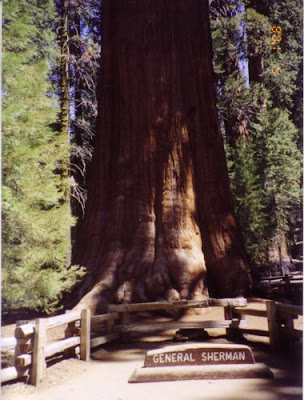 In fact, it could be the world's largest living thing, but scientists aren't sure whether some huge underground fungi complexes are technically bigger. But if the tree wants the claim, I'm not going to argue.

The General Sherman (the crew that worked on access to the area used to serve under the Civil War leader) Tree checks in at 2.7 million pounds, and its circumference is 102.6 feet. The museum has a stat about how many thousands of basketballs you could fit into the thing.

And it's still growing. It will catch that darn fungus yet.

Be notified of new posts via Twitter @WDX2BB.
Posted by Budd Bailey at 5:46 PM