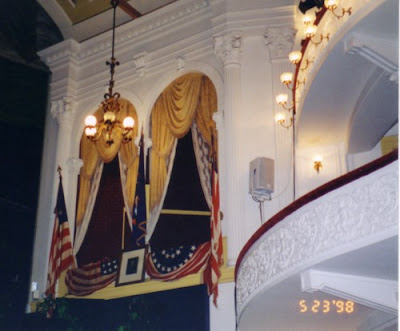 President Lincoln was a lover of the theater, as he often went to see a play during his time in Washington. Therefore, it was only natural that he went to Ford's Theater shortly after the Civil War ended.

You know what happened next. John Wilkes Booth entered the room shown above, shot the President, and jumped on to the stage. Lincoln was taken across the street, where he died.

Ford's Theater is still open for business, decorated in a 19th century style. It was renovated in 2009. The basement has exhibits on Lincoln and the assassintation, and talks are given throughout the day on the act.
Posted by Budd Bailey at 7:10 PM