Milwaukee, Wisconsin: Statue of the Fonz 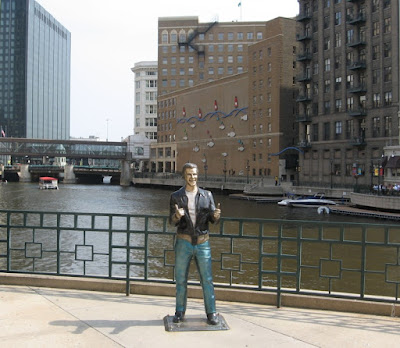 He's one of Milwaukee's most famous residents, if fictional characters count.

"He" is the Fonz, Henry Winkler's character in the television series "Happy Days." The show was set in Milwaukee, and the Fonz became a memorable figure within a couple of years.

But how to honor him? The city fathers decided a statue on the Riverwalk would be appropriate. It went up in 2008, with much the show's cast attending the dedication. So the Fonz's image is there to welcome visitors, 24 hours a day.

How to get there? Head for the intersection of Wells Street and the Riverwalk. It's on the east side of the river, south of Wells.

The one catch might be that the statue doesn't look like it is in a particularly busy or prosperous section of the Riverwalk. Commercial development seems a little spotty in the region. But, you gotta start somwhere.
Posted by Budd Bailey at 12:44 AM

Labels: Milwaukee/Wisconsin: Statue of the Fonz