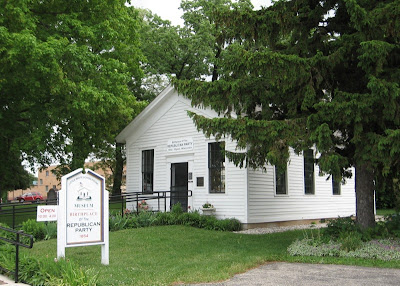 That's right. The Grand Old Party has a birthdate -- March 20, 1854. The debate about slavery was raging at that point, and the Whig Party had essentially gone out of business. Alvan Bovay had moved to Ripon from New York, where he was a friend of newspaper publisher Horace Greeley. The Kansas-Nebraska bill had extended slavery into new locations, and Bovay had had enough. Some ex-Whigs and Free-Soil party members got together to see if they could come up with something better. Bovay suggested the name "Republican" and it went over pretty well and was adopted. Bovay wrote Greeley, and the fuse was lit.

In quick succession, the Republicans had a state meeting in July of 1854 in Michigan. Then the first national convention followed in 1856 in Pittsburgh. You could probably argue that our system is designed for two strong parties, and the vacuum had to be filled somehow. Even so, it was filled by an idea that started here in Ripon.

The hosting Little White Schoolhouse is located right in the middle of downtown, having been transported a few blocks before landing in its current spot in 1951. There are a few exhibits on the walls, and replicas of schoolbooks from the past are placed on the benches.

The facility is not heated, so you'd better show up between May and October when it is open. There's a most friendly woman who works inside that is more than happy to go over the history of the place. She even seemed appreciative when we pointed out that Greeley's name was misspelled on a blackboard in the front of the schoolhouse. (Note: His name also is spelled incorrectly once in the official brochure. Tsk, tsk.)

You don't have to be a Republican to enjoy a short visit to the place if you are in the area.