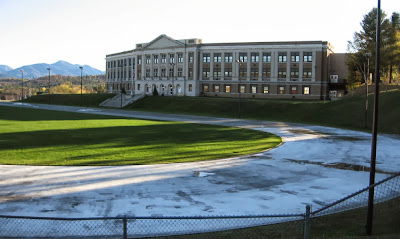 Some sports history was made here, believe it or not.

The title of the post gives it away. This was the setting for speedskating during the 1980 Winter Olympics in Lake Placid. It's where Eric Heiden became a legend.

Heiden went five for five in gold medals. He won in sprints, and he won over long distances. It might just be the greatest single performance in Winter Olympic history.

There's a large sign just to the right of this picture against a hill that has a tribute to the legends of this oval. As you'd guess, Heiden is one of them. (The sun was in the way of a picture of it, so you'll have to take my word for it. This is more impressive.)

The nice building up the hill is actually Lake Placid High School. It is across the street from the Olympic Center. So if the teens need inspiration to succeed, they don't have to go too far.

Be notified of new posts via Twitter @WDX2BB.
Posted by Budd Bailey at 12:26 AM