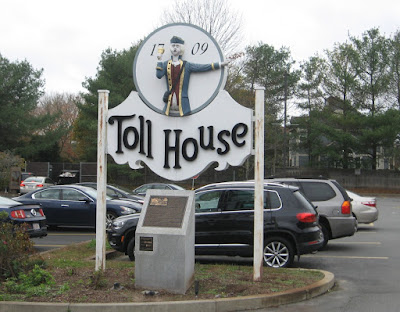 There's a sign and a plaque in the middle of a parking lot between a Walgreen's and a Wendy's in Whitham, Massachusetts. Those who pass by must wonder what the fuss is all about.

Visitors to this site will know better. The location is the birthplace of the chocolate chip cookie - known as the Toll House cookie in some circles.

The building was constructed in 1930, and yes, it was on a toll road between Boston and New Bedford. It established a good reputation in no time, attracting everyone from John Kennedy to Bette Davis.

Co-owner Ruth Wakefield liked to bake cookies for the place, but she ran out of nuts one day. Therefore, she substituted pieces of chocolate. That was supposed to melt and be part of the cookie, but it held its shape and became soft and tasty after baking. The chocolate cookie quickly became a regional favorite.

It did wonders for Nestle's chocolate sales, too. Eventually, the Wakefields and the company worked out a deal. Nestle sent Ruth all the chocolate she needed for life, while Nestle printed the recipe on its package. It worked out well for both sides.

Sadly, the Toll House itself burned down on New Year's Eve, 1984. It wasn't rebuilt, so this plaque will have to do as a reminder of the place.

On a personal note, my parents had their wedding reception here in 1950. It's funny to think of such a place as a landmark, but that certainly is the case.

Be notified of new posts on this site via Twitter @WDX2BB.
Posted by Budd Bailey at 3:11 PM No comments: 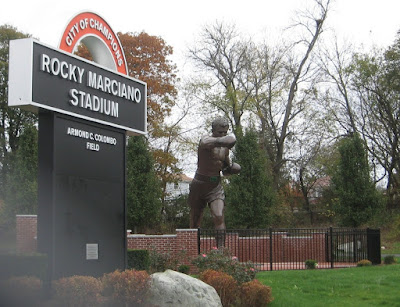 Rocky Marciano really is the favorite son of Brockton, Massachusetts.

The heavyweight boxing champion has one of the greatest careers in his business. He retired as an undefeated champion, which no one else in that division has been able to do successfully. Rocky grew up in Brockton in southeastern Massachusetts. During his reign as champion, all of Brockton would come together to celebrate his latest win.

This is said to be the largest statue of an American sports hero ever made. It was dedicated exactly 60 years after he won the title with a sensational knockout of Jersey Joe Walcott.

Two more points about this tribute. One, I believe Rocky dropped out of high school; my father was a couple of classes ahead of him at Brockton High. So it's a little odd to name a school stadium after him in that sense. Two, there is a good-sized fence around Rocky's statue. During my visit, I had to shoot the statue through a chain-link fence. That explains the slightly blurry picture in the bottom left of this photography.

By the way, a park in Brockton where Rocky used to play as a boy is said to be receiving a major facelift. The facility is named after him.

Be notified of new posts on this site via Twitter @WDX2BB.
Posted by Budd Bailey at 3:00 PM No comments: 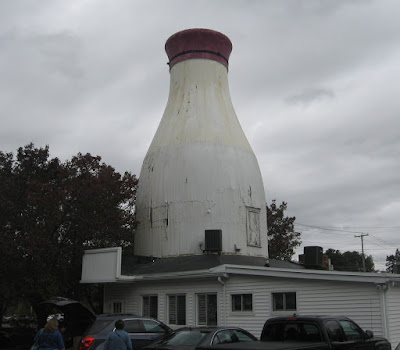 "The Milk Bottle" is located in Raynham, not too far from the Rhode Island border. The place is only a few miles south of the Interstate. It remains a family restaurant, and serves ice cream.

Apparently the place is doing well these days. During our visit the parking lot was full and there was a wait to get a table. We didn't have time to sit around, so this photograph will have to do.

I thought I saw a PBS documentary on this place a while back, which is what caught my eye when I discovered that we'd be driving by it. I'm not sure if it is the same store. The documentary shows the inside of the milk bottle, which is used mostly for storage.

Be notified of new posts on this site via Twitter @WDX2BB.
Posted by Budd Bailey at 2:48 PM No comments: 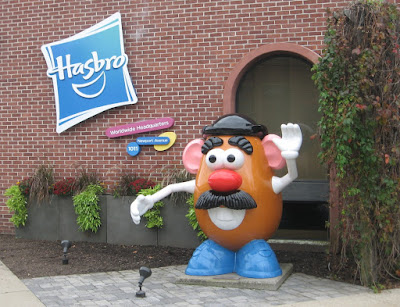 It's always fun to see a big celebrity while traveling. And who is bigger than Mr. Potato Head? Not even G.I. Joe?

Mr. PH was invented by George Lerner in 1949 - a potato in which various plastic parts could be inserted to form a character. There were some complaints about the use of a real potato with the toy, so in 1964 Hasbro moved to a plastic head. And the rest is toy history. Mr. Potato Head is in the Toy Hall of Fame. He was famously voiced by the late Don Rickles in the "Toy Story" series.

Naturally, everyone wants to see Mr. Potato Head when visiting the Hasbro factory in Pawtucket. He's always willing to greet guests there, already to pose with a big smile and a wave. By the way, Pawtucket is also the home of Mrs. Potato Head, a relatively new toy.

I wonder what hat size he wears.

Be notified of new posts on this site via Twitter @WDX2BB.
Posted by Budd Bailey at 2:35 PM No comments: 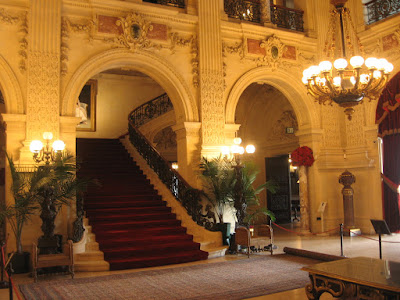 The railroad industry sure isn't what it used to be.

Back in the 1890s, Cornelius Vanderbilt was the custodian of a large financial empire. His grandfather had been very successful in steamships, and then led the New York Central railroad. Cornelius had owned some property in a prime spot of Newport's shore line, but it burned to the ground in 1892.

Vanderbilt opted to try again, bigger and better than ever. This is the resulting mansion. It's called "The Breakers" because this is where the ocean water breaks. The building was passed down through the family and eventually sold to a Preservation Society. Cornelius, by the way, died in 1899 - so he didn't get to enjoy the place for long.

They don't built them, or furnish them, like this any more. There are fewer rooms than you'd think in the first two floors, which are the ones open to the public. OK, there are still quite a few by the standards of most people. Still, the rooms are big, really big.

The photograph shows the main entrance area to the mansion "The Great Hall." I guess you could call it the living room, and it was often the center of activities during the frequent parties that went on there each summer. (The Vanderbilts were just about at the top of the social register in those Gilded Age days.) Visitors are handed a headset with an audio tour of the facility. It covers the basics nicely, and also has some extra sections for those who want additional information on a particular subject along the way.

Head outside, and you'll the see the magnificent grounds. There are great views of the ocean, of course, but there's enough land to spread out a bit. The landscaping, as you'd suspect, is also most impressive.

It's all done in a classy, dignified manner. Some will go through the place and think that maybe the workers could have used a raise of two cents an hour instead of the owner building yet another mansion like this. But there's no rewriting history, and it's still fascinating to see this.

There are other mansions around Newport from that era, and they are open to the public as well. They certainly have some unique qualities that are worth seeing. But the Breakers is the biggest and the best of them. If you have time to see only one mansion while in Newport, this is the one to see.

Here's a look on video:

Be notified of new posts on this site via Twitter @WDX2BB.
Posted by Budd Bailey at 11:25 AM No comments: Let's go for a walk.

The Cliff Walk in Newport certainly is a good place for one. It goes for about three and one-half miles along the southern edge of the town, with the bay and ocean keeping you good company along the way.

This is a walk where you aren't sure where to turn. The coastline is one of New England's best. The rocks along the way supply character, and the waves add a dash of excitement. But turn toward land, and you can see spectacular mansions that date back more than a century. There are 64 private properties along the way as well as some public ones.

Most of the path is paved and easy to navigate, although there are some steps along the way. The end part isn't so easy, at least as of the fall of 2017. But you can stop at many different points along the way and cut toward the town streets. There is a bus line that goes right by much of the route, so you can hitch a ride back quite easily if you are tired.

Close your eyes, and you can almost picture one of the Vanderbilts doing wheat you're doing.

Be notified of new posts on this site via Twitter @WDX2BB.
Posted by Budd Bailey at 11:04 AM No comments: 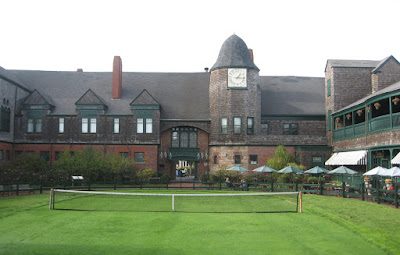 Sometimes the architecture can be a star of an attraction.

Such is the case, at least for some, of the International Tennis Hall of Fame. It's not quite up there as a must-see for tourists with the mansions of the town, but it's worth a visit.

The facility is located on a busy Newport street, but the entrance takes up a small part of the block. You can see it here below and to the left of the clock. Shops are located along the way. But visitors walk inside, and they see an area that's been hosting tennis matches since 1880. In fact, the first U.S. national championship was played here from 1881 to 1914, before it moved to New York. You might have heard of the U.S. Open.

The building that holds the Hall of Fame surrounds three sides of the tennis court pictured. There's an entrance to the left, and after paying visitors go up some expensive-looking stairs into the Hall itself. Visitors then work their way around the connected building. As you'd expect, there are trophies - lots and lots of trophies, old and new. The same could be said about racquets. A relatively small room is dedicated to those who have been inducted over the years - more than 250 of them. The list includes players, coaches and contributors. There is a good collection of videos available.

After touring the Hall, visitors are free to walk around the grounds. A men's tournament is still staged there every summer, although the best players usually don't take part. But the facility is open to the public, so anyone can bring a racquet and play on the beautiful grass - just like people did in 1880. A restaurant is also on the grounds; it's on the right of the photograph.

Newport may not be the ideal place to host the Hall of Fame in terms of economic impact. A big facility at Flushing Meadow in New York might have more of an impact. But you can't measure charm and tradition in dollars, and clearly Newport has that here.

Be notified of new posts on this site via Twitter @WDX2BB.
Posted by Budd Bailey at 10:49 AM No comments: