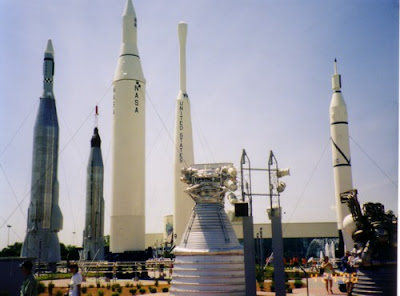 One of the best attractions at the Kennedy Space Center is one of the oldest. It's called a Rocket Garden, and there are no gimmicks or stunts designed to keep the kids entertained. There are all sorts of rockets from U.S. and Russian (an interesting addition over the past several years) space efforts. If nothing else, you'll admire the guts of the people who went up to the top of those machines and rode them into space even more than you do now.

The space garden also has replicas of the various capsules from Mercury, Gemini and Apollo. Visitors can climb into them and get somewhat claustrophobic. Eight days in a sardine can would be enough to make anyone nervous.
Posted by Budd Bailey at 12:46 AM