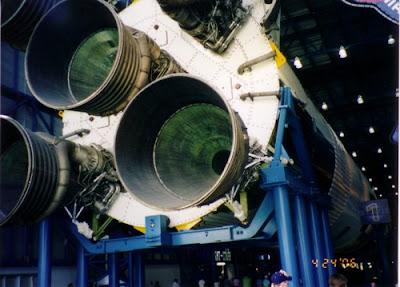 The Apollo 19 moon shot was cancelled in the early 1970's because of funding problems, but NASA had a leftover Saturn V rocket. So they saved it, and you can see it at the Kennedy Space Center. It hangs from the roof, as the picture shows ... sort of.

This view from the back doesn't do it justice. It is something like three football fields long and has two million working parts. (Insert joke about low bids here.) The Saturn V remains the largest rocket ever built. Seeing it makes the whole moon program that much more impressive.

Before you get to the Saturn V, visitors get to see a short film on the Apollo program. Then they go into a room where the actual consoles from Mission Control have been modified for public viewing. The last few minutes of the countdown of Apollo 8 are recreated. It's very well done.
Posted by Budd Bailey at 12:44 AM