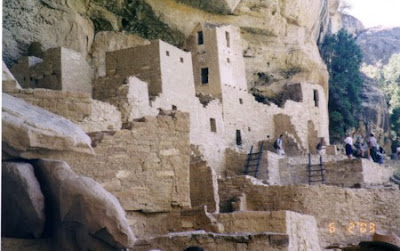 About 750 years ago, a civilization lived in what is now Southwest Colorado. The people there were smart enough to build dwellings on the inside of cliffs, blocking out the hot sun of the summer and the cold winds of the winter. It's the oldest known "city" in the United States. Around 1276, a drought hit, and after several years of "dry" weather the residents decided there had to be a better place to live. So they left.

It took hundreds of years for later settlers to even find the place, and a few more to figure out that the place needed protection from scavengers. So, it became known as Mesa Verde National Park. Scientists are finding out new information about the region all the time.

It's possible to tour the best sites (like the Cliff Palace, shown), although it can only be done through a guided tour. There are some warnings connected to a few of the tours; you'll need to go up and down ladders and squeeze through narrow passages in spots. Still, it's remarkable to see how well the remains have held up all these years later.

Be notified of new posts via Twitter @WDX2BB.
Posted by Budd Bailey at 1:34 PM