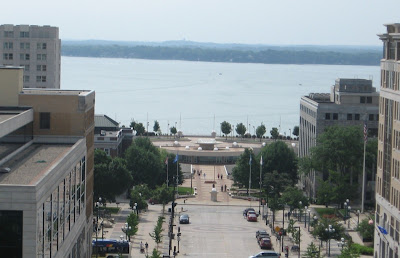 The good people of Wisconsin really took their time with this one.

Frank Lloyd Wright came up with the idea to design a "convention center" in 1938. It got built about 59 years later. Heck, Wright himself died in 1959.

The idea was to connect the lakefront to the state capitol. This picture was taken from the observation deck of the capitol. You can see a fountain in the middle, and there's a nice patio on the roof. Inside, there is plenty of rooms for meetings, receptions, etc. When we were there, a public radio program was being broadcast.

The picture isn't the best of the facility, of course. We probably needed to go out on to the water and look back to get the full impact of the building. Nice to see the place done, though.
Posted by Budd Bailey at 12:14 AM