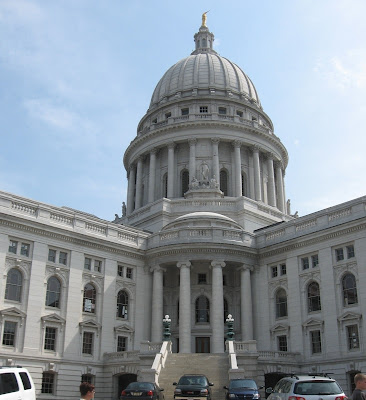 The summer of 2011 was a very odd time to visit the State Capitol building in Madison.

Where did all the protesters go?

The building was the center of attention during the months before that, what with the fight between Governor Walker and Democrats in the State Senate and the neighborhood filled with angry workers. The area became almost familiar through television.

A budget was passed shortly before our visit, and the only people in the surrounding streets this Saturday were customers for the farmers' market. It was a peaceful mob.

The Capitol is an impressive building even when not filled with angry people. After a rebuilding from a fire that was completed in 1917, the "new" structure is said to be closer to the U.S. Capitol than another state's center of government. The building is located on top of a hill between two lakes in downtown Madison. The facility has four main areas (executive, Senate, Assembly, Supreme Court) with a common meeting area under the dome.

Tours are available throughout the week, and are pretty interesting. Visitors do get to actually sit in the Senate chamber, which is odd considering the angry confrontations from that area shown on the news shortly before that. And the tour includes a visit to the observation deck, which has a nice view of downtown Madison and the University of Wisconsin.

But if you do visit, don't bring any tomatoes. Leave that to the legislators.
Posted by Budd Bailey at 12:02 AM