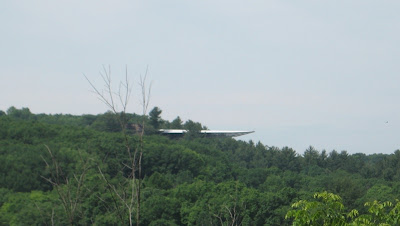 Alex Jordan wanted to be an architect, so he applies to study under Frank Lloyd Wright's studio just down the street. Jordan was eventually told that he wasn't good enough to design a chicken coop and told to get lost.

The result is "The House on the Rock," a rather peculiar tourist attraction in Spring Green. Words fail us in trying to come up with a description of the place.

There are three separate tours in the facility. The first is of the house itself, which has some odd touches that feel a little like a Wright project. The rocks on the mountain are part of the architecture, and the ceilings are low. It is unusual.

The most striking part of the house certainly is "the Infinity Room." This extends out from the rock into space. You can see a picture of it here, taken from a scenic viewpoint on the road to it. Even though visitors can't walk all the way to the end -- there's a barrier about halfway out -- they can go for enough to get dizzy in some cases.

Jordan opened up the facility to visitors and sold tickets, and people flocked to it. Naturally, he started plowing the profits into buying, um, stuff. The collections make up Tours Two and Three. The centerpiece is the world's largest carousel, which is great fun to watch. There are all sorts of other things here, such as guns and dollhouses and replica whales and a Streets of Yesterday display. On and on it goes. You just never know what's around the next corner.

There are no rhymes and little reason to the layout, and the effect is to make the late Mr. Jordan come off as, um, odd. This reminded us of Northlandz in Flemington, New Jersey, only bigger. Oh, there are some nice gardens on the grounds, and a building that offers insight into Jordan's life.

We thought tours one and two were the most interesting, while number three wasn't really worth the time. Your opinion may differ. The price for two tours isn't much different than for three, so if you make the effort to get there you might as well go for the Full Jordan.

P.S. The facility also runs an Inn and a Resort, complete with golf. We heard good things about the Resort and mixed reviews for the Inn.
Posted by Budd Bailey at 2:03 PM