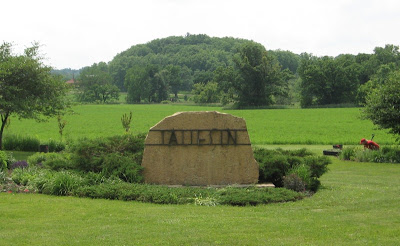 If you like Frank Lloyd Wright, then a trip to his house in Wisconsin obviously makes sense a tourist attraction.

Wright always struck us as more of an artist than an architect. As he put it, he had a choice between arrogance and false modesty, and he took the former. But there's no double his work was distinctive, almost museum-like.

To be fair, this is pricey stuff. As of 2011, the house tour costs $47, and the full tour is $52. That's not Disneyland, but still rather expensive. So we passed on it. But those who like Wright's work seem to think it was worth it. Check out the reviews for proof. Reservations are suggested.

By the way, there's a visitors' center across the road from the actual home, which is nicely done. We didn't have the guts to sneak down the private road to take a picture of the house, so this shot of the entrance will have to do.
Posted by Budd Bailey at 2:23 PM