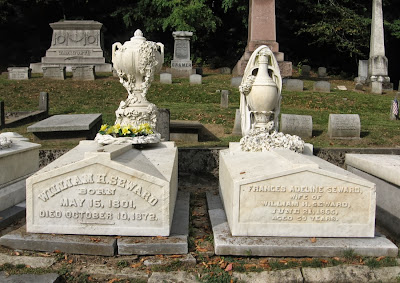 It seems very appropriate that William Seward's final resting place is located only a couple of hundred yards from the burial spot of Harriet Tubman.

Seward, the Secretary of State under Lincoln, was a strong abolitionist. His house in Auburn was indeed a stop on the Underground Railroad, which Tubman used to guide slaves to freedom. Considering that Seward was a well-known politician (once the Governor of New York), it's impressive that he'd take such a strong stand on this issue.

Seward is buried in Fort Hill Cemetary, located just west of South Street where Seward lived for much of his life. He is surrounded by his relatives.

Be notified of new posts via Twitter @WDX2BB.
Posted by Budd Bailey at 3:26 PM