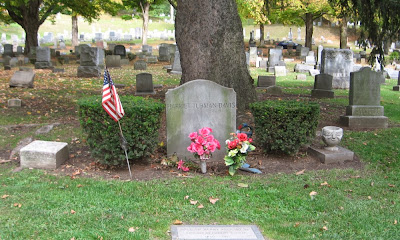 When it comes to distinguished women of the 19th century, it's tough to top Harriet Tubman. No wonder Auburn is proud to claim her.

Tubman was a slave as a child in Maryland but eventually escaped. She returned to free other members of her family, one at a time. From there it was an easy jump to helping others via the "Underground Railroad." When Congress passed the Fugitive Slave Act in 1850, Tubman helped get the slaves all the way to Canada to find freedom.

From there, she later worked for the Union Army - eventually serving as a spy. After the war, she retired to the family home. Eventually, Tubman became involved in the woman's suffrage movement, which was more or less formally born down the street in Seneca Falls.

Tubman is buried in Fort Hill Cemetery in Auburn. Head south from the middle of the city on South Street, take a right on to Fitch Ave., and look for an entrance. Harriet is in West Lawn C on the far western edge of the grounds.

Be notified of new posts via Twitter @WDX2BB.
Posted by Budd Bailey at 3:19 PM