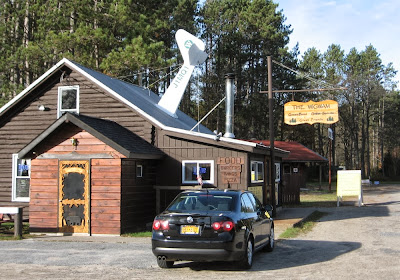 Ever have someone visit, and you say to them, "Just crash anywhere"?

Apparently someone took it literally.

This is a special from the good folks of Roadside America. Someone must have been coming down Route 28 to or from the Adirondacks, and saw this sight - and spread the word.

The Wigwam Tavern has its own Facebook page - naturally - but there's no explanation for the airplane. You have to go to a newspaper article for that.

It seems a plane crashed at the airstrip that's out back, and some local residents took the back of it and attached it to the tavern when the owner wasn't around. It became a landmark. The tail got replaced in 2005 by one of the patrons.

What's more, the food is said to be good too.

Be notified of new posts via Twitter @WDX2BB.
Posted by Budd Bailey at 1:17 AM