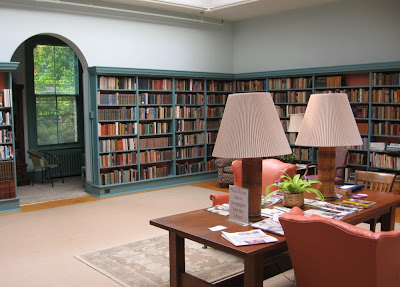 It's easier than you think to stay in a National Historic Landmark. It's not too expensive either.

The landmark in question is the Oneida Community Mansion House, located between Syracuse and Utica. It's just down the street from Turning Stone Casino in Verona, if that helps.

Back in 1848, John Noyes founded the Oneida Community. A few hundred people lived together in this mansion as Noyes hopes to point Christianity in a new direction. There was a lot of this stuff in upstate New York in the 1800s, including the Mormons and the Shakers. Obviously, the Mormons are the ones that survived.

As for the Oneida Community, the people are famous for a couple of things. First, they believed in "complex marriage" among all believers. You'll have to ask the people there how they managed to avoid a population explosion during the 32 years or so they were all together.

Noyes fled the mansion, and the country, in 1880 when there were reports that he was going to arrested on statutory rape charges. While the residents stayed in the mansion for the most part after that, they changed their ways a bit. They also went into the silverware business shortly after that, and Oneida Silverware became a popular dinner table accessory for more than a century.

The rooms are big and old and beautiful, with high ceilings and noisy radiators. Each stay includes a free tour of the building, which has some areas that are set aside for museum-like purposes. The mansion also has some apartments.

I could show you a picture of the beautiful exterior, but the library seems like a better choice. It's open to all, and books go around the walls of the room in cases - thousands and thousands of books. It's particularly nice in the daytime with the room's skylight windows. There's no better place to read a book or magazine.

Be notified of new posts via Twitter @WDX2BB.
Posted by Budd Bailey at 2:43 PM