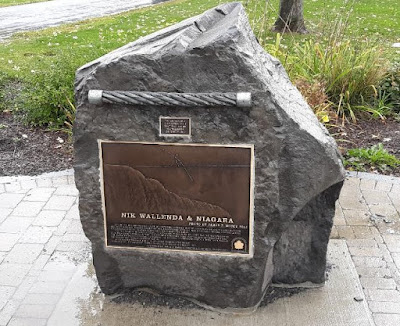 Nic Wallenda cornered the market on that quality on June 12, 2012. That's when he walked on a high wire across the gorge that forms Niagara Falls between the United States and Canada. Wallenda did it with the Falls roaring below him, in front of a national television audience.

Now that "stroll" always will be remembered. An historical marker was placed in the area in July 2014. It's about 25 yards from the place where Wallenda started his walk. It ended safely on the Canadian side about 26 minutes later.

The rock used for the marker was taken from the gorge. Also attached is part of the wire that crossed the gorge that day.

Here's how Nik's walk looked when it happened:

Be notified of new posts on this site via Twitter @WDX2BB.
Posted by Budd Bailey at 12:59 PM