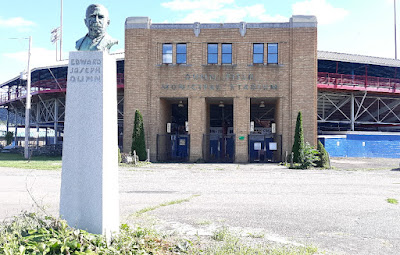 This has been the spot for baseball for years and years in Elmira. It contains more sports history than I thought - and I spent five years there in the 1960s. Who knew?

This spot used to host the Maple Avenue Driving Club in Elmira. In 1885, the Buffalo Bisons were finishing out their time in baseball's National League. They had sold most of their players away, and were using any warm body to fill out the lineup. (No wonder they closed with a 16-game losing streak.)

For whatever reason, the final double-header of the season for the Bisons was played in Elmira. Providence knocked off Buffalo twice. Still, this is the home of a major league game, played on October 10. Considering that Buffalo hosted the Blue Jays in 2020 and 2021, it's almost amazing that Buffalo's last games in the National League more than a century before that were played somewhere else.

Some more history arrived here in 1902. The first night pro football game to be played under lights was held here. The Philadelphia Athletics and Phillies of baseball team formed a football team that year, in a small league called, yes, the National Football League. On November 21, the Athletics played the Kanaweola Athletic Club of Elmira. Special trains from surrounding towns were set up so that more people could watch the games. Philadelphia was too good on this night, winning by a score of 39-0.

(Thanks to Diane Janowski's story for information on the football game.)

Now back to baseball. Recreation Park was placed on this site, but it burned down in 1938. Dunn Field, named after a local businessman who donated the land, replaced it. Elmira hosted Class A and AA teams for several decades. Among the Hall of Famers who called this home were Jim Palmer and Wade Boggs. Earl Weaver managed here for a while, selling cars in the offseason to make ends meet. Don Zimmer got married at home plate here. The park, which is located very close to the Chemung River, got clobbered in 1972's flood, but it was fixed up. Eventually, the team - almost always called the Pioneers - fell off the minor league map.

Still, the building is used for a team in a summer college league. When we visited it, the top of the right field fence bent backwards. You'd think that balls that struck it might roll around like a marble in a toilet. Other events are staged there as well.

A visit here is an exercise in nostalgia for me, since I watched minor league teams from the Orioles, Royals and Padres play Double A ball here. But what this place really deserves is a couple of historical markers.