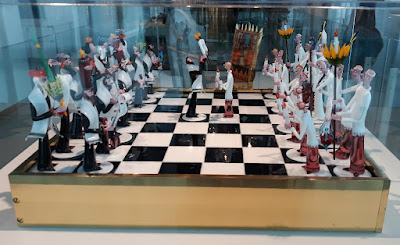 Corning Glass has been around for more than 150 years, and one of its biggest gifts to the community in upstate New York - besides steady employment - has been its museum. The Corning Glass Museum opened as a 100th anniversary present to itself and the area in 1951.

The present structure was in place through 1972 when a flood struck the area. The museum went through a gigantic restoration project, as several items were damaged by the water - which was as high as halfway up the walls of a lower floor. Some of the items, including rare books, received a painstaking restoration. The museum was rebuilt to that most of the items were above the previous flood plane. So far, so good, in that department.

There are all sorts of items on display, dating back about 3,500 years. A few special exhibitions come and go throughout the year to keep things relatively fresh. There a couple of different glassblowing demonstrations that take place throughout the day. It really is fascinating to watch the process in action. But some of the items are remarkable. Take, for example, the one in the photo here. That's quite a chess set, and it's made of glass.

The Museum is easy to find. It's right off Interstate 86 in Corning, and the way to it is well marked. This definitely is the type of museum that you'd find in a big city, except it's in a little town that has become world famous because of glass.