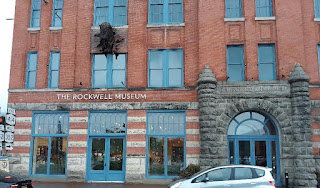 Say, what's that buffalo doing up there?

Certainly that's a question that has come up when people walk by the Rockwell Museum in downtown Corning. It's not highlighted on the literature, which is at the least an interesting decision.

Even so, it's a little tough to find the answer. But the building has a relatively a good history, even without an explanation.

It seems Robert Rockwell arrived in Corning to run a department store owned by the family, and he brought some art and artifacts with him. The collection was displaying in the store on Market Street from 1960 to 1975.

Meanwhile, in 1973 - two years after the devastating flood - some officials from Corning Glass decided to find a good home for the collection. Call it a Bicentennial gift. The facility opened in 1980 in a hotel as something of a temporary stop. But bigger plans were in the works. The Old City Hall was offered by the city as a place for a museum. The facility was renovated, and opened as the Rockwell Museum in 1982. It went through a big renovation almost 20 years later. Indeed, it's a very nice facility to hold its contents.

You can buy a combination ticket to the Corning Glass Museum and to the Rockwell Museum. What's more, Corning Glass has a shuttle service that links the two facilities, as well as a couple of other stops. It's not a bad walk between the locations, but those who prefer a free ride will be glad to see this.