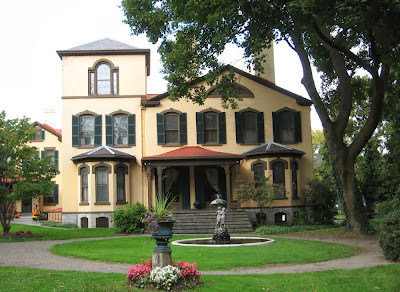 If history had bounced in a different direction, William Seward might have been President of the United States. He was a top contender for the Republican nomination in 1860 after serving as Governor of New York. But he couldn't get a majority of the delegates' votes, and eventually lost to someone named Abraham Lincoln.

Seward, not being a sore loser, joined Lincoln's cabinet as Secretary of State. Doris Kearns Goodwin is very appreciative of that. He helped the Union win the Civil War in a variety of ways; later he came up with the idea of buying Alaska from Russia. That worked out well for the American side.

But Seward always liked returning to his home in Auburn. He kept it throughout his political career, and it stayed in the family for a couple of generations after he died. However, the building eventually was donated to a non-profit agency for display, thus making the Seward House a nice stop in the middle of Central New York.

Pictures aren't allowed inside, but the structure still has plenty of items that Seward actually used when he was alive. Particularly impressive is the upstairs hallway, filled with pictures (some autographed) of diplomats and royalty from that era. The Seward House also has a flag with 49 stars in it. The State of Alaska gave it to the collection when it joined the United States in 1959. Sort of a thank-you gift.

Tours are available frequently; check the sewardhouse.org website for hours of operation. Our tour was given by the official county historian; she really knew her stuff.

Just think how close we came to seeing a movie called "Seward." By the way, in the 2012 "Lincoln" movie, David Strathairn prepared for his role by coming to Auburn and looking at the house. Good idea.

Be notified of new posts via Twitter @WDX2BB.
Posted by Budd Bailey at 3:06 PM