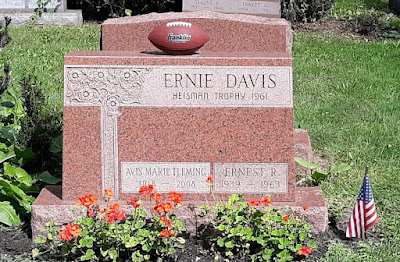 There aren't many sadder stories in sports than the one describing Ernie Davis. The fact that it comes out of a relatively small town only adds to the poignancy.

Ernie moved to Elmira at the age of 12 to live with his mother and stepfather. He became one of the city's all-time great high school football players at Elmira Free Academy, graduating in 1958.

From there it was on to Syracuse University. As a sophomore in 1959, Ernie helped SU win its only national championship. In 1961, Davis became the first African American to win the Heisman Trophy - which was quite an achievement since many Southern voters of the time would not vote for a Black player.

In 1962, Davis became eligible for the NFL draft. The Cleveland Browns sent future Hall of Famer Bobby Mitchell and a first-round pick to Washington for the No. 1 overall choice, and took Davis. The dream was to have Ernie line up next to fullback Jim Brown to form a dream combination. In 1962, Davis prepared to play in the College All-Star game, only to become ill. The diagnosis was leukemia.  He suited up but did not play in a Browns' preseason game. Davis died on May 18, 1963.

If you are in Elmira, it's rather easy to pay your respects to this College Football Hall of Famer. He is buried in Woodlawn Cemetery, not far (a little northwest and down the hill) from Mark Twain's grave. There are signs if you get close, but a stop at the office first might be in order. Davis is buried next to his mother. During our visit, we tossed the football a couple of times - thinking Ernie might like that.